Accessibility links
Richardson Makes His Bid Official, in Spanish New Mexico Gov. Bill Richardson has announced his candidacy for the presidential vote in 2008. Part of Richardson's announcement was in Spanish, as he said, "With pride, I hope to be the first Latino president of the United States." Richardson was born in California, where he made his announcement.

New Mexico Gov. Bill Richardson has announced his candidacy for the presidential vote in 2008. Part of Richardson's announcement was in Spanish, as he said, "With pride, I hope to be the first Latino president of the United States."

Richardson was born in California, where he made his announcement Monday. The son of an American banker father who was posted to Mexico City and a Mexican mother, Richardson is a native Spanish speaker; he would be the first Hispanic presidential nominee of either major party.

As of Monday, Richardson's standing in the polls had risen to 10 percent, making him the Democrats' No. 4 candidate in Iowa and New Hampshire. 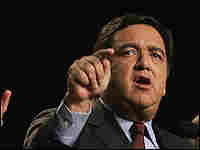 New Mexico Gov. Bill Richardson argues, with considerable validity, that no other Democratic presidential candidate comes close to his vast foreign policy experience. His propensity for back-slapping and schmoozing can make one forget the time that Richardson has spent as a serious diplomat.

Richardson served 14 years as a member of the House before taking on the post of U.S. ambassador to the United Nations under President Clinton. He has held sensitive negotiations in places such as North Korea and Sudan. He can even claim bipartisan respect, having traveled to Pyongyang — with President George W. Bush's blessing — to talk about North Korea's nuclear program.

Add that resume to his geographic advantage (he is the only candidate from the West, and Nevada is conveniently an early caucus state next year) and his Hispanic heritage (his mother is Mexican), and one can see Richardson increasing in stature as a candidate. The early primary states of California and Florida are also rich with Hispanic voters, whom the Richardson campaign is sure to woo.

Richardson has taken some positions not widely shared among his fellow Democratic candidates, such as supporting gun rights. Of all the presidential candidates — from both parties — no one has received a better rating from the National Rifle Association than Richardson. He also has talked about his refusal to raise taxes in New Mexico – normally a Republican position.

With so much attention focused on New York Sen. Hillary Clinton, Illinois Sen. Barack Obama and, to a lesser extent, former North Carolina Sen. John Edwards, Richardson remains a long-shot candidate, and he has acknowledged that on the campaign trail. He has raised far less in campaign funds than the so-called "Big Three." The Nevada caucuses, scheduled for Jan. 19, 2008, are seen as his potential break-out opportunity. But if he fails in his bid for the nomination, he has been mentioned as a potential vice-presidential choice or, more likely, a potential secretary of state in a Democratic White House.

So You'd Like to Be President: Richardson Ad May 10, 2007
Presidential Campaigning in Exeter, N.H. May 6, 2007
Democratic Presidential Hopefuls Court Black Mayors May 5, 2007