Accessibility links
Brief Pause in Lebanese Violence Allows Aid In Lebanon's Nahr Bared refugee camp outside of Tripoli, there was enough of a pause in the battle between the Lebanese Army and members of the Fatah Islam militant group to allow the transfer of the wounded to hospitals outside the camp, and transfer of humanitarian supplies in.

In Lebanon's Nahr Bared refugee camp outside of Tripoli, there was enough of a pause in the battle between the Lebanese Army and members of the Fatah Islam militant group to allow the transfer of the wounded to hospitals outside the camp, and transfer of humanitarian supplies back in.

Robert Siegel talks with Rym Ghazal, reporter for The Daily Star. Ghazal talks about the latest on the fighting, and the origins of the group. 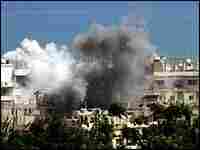 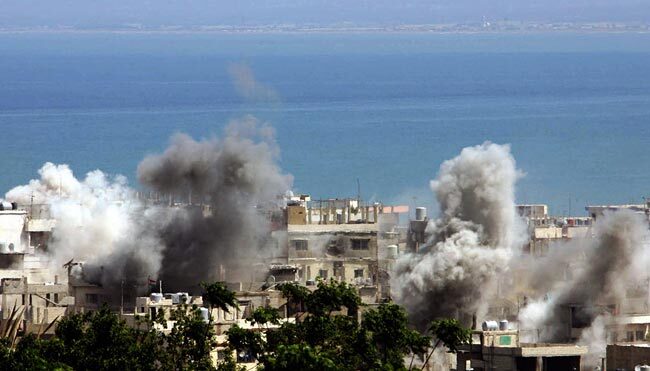 Smoke billows from the Palestinian refugee camp of Nahr Al-Bared near Tripoli in northern Lebanon, May 21, 2007, as Lebanese troops fought new gun battles with Islamic militants. 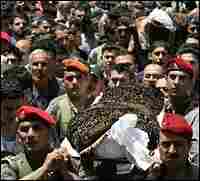 Lebanese soldiers in a May 21 funeral procession carry the bodies of troops killed in fighting in Tripoli. Ramzi Haida/AFP/Getty Images hide caption 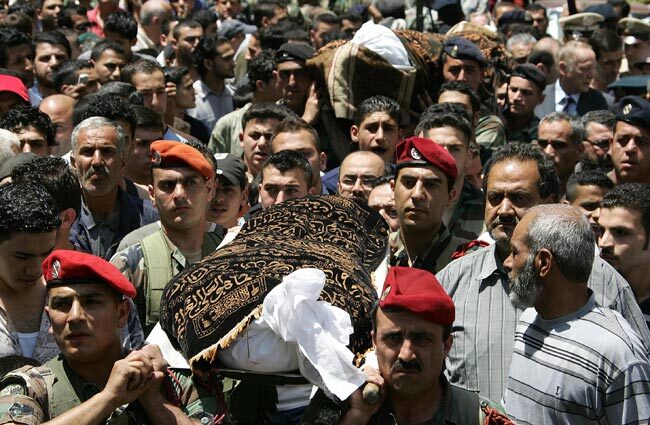 Lebanese soldiers in a May 21 funeral procession carry the bodies of troops killed in fighting in Tripoli.

It was the second day of the siege against suspected members of the Fatah Islam group inside the Nahr el-Bared camp near the northern city of Tripoli.

The death toll remained uncertain as hundreds of Lebanese army troops, backed by tanks and armored personnel carriers, surrounded the camp. The tanks opened fire and mortar fire was returned from inside the camp.

Lebanese officials said Saddam El-Hajdib, one of the men killed in Sunday's fighting, was the fourth-highest ranking member of Fatah and a suspect in a failed German train bombing. In the past, others in the camp have said they were aiming to send trained fighters into Iraq.

At least 27 soldiers and 20 militants had been killed, Lebanese security officials told the Associated Press Monday, but the officials said they did not know how many civilians had been killed inside the camp because it is off-limits to their authority.

However, one camp official put the total dead at 34, including 14 civilians. But that could not

be independently confirmed and other estimates of civilian deaths were lower.

Ahmed Methqal, a Muslim cleric in the camp, told al-Jazeera television by phone that sniper fire had confined the camp's approximately 30,000 residents to their houses and that five civilians had been killed.

"They are targeting buildings, with people in them," he said. "What's the guilt of children, women and the elderly?"

An army officer at the frontline, speaking on condition of anonymity because he was not authorized to speak to the media, said troops directed concentrated fire at buildings known to house militants.

"Everything we know that they were present in has been targeted," he told the AP.

Lebanon has struggled to defeat armed groups that control pockets of the country, many of whom operate inside the country's 12 Palestinian refugee camps that house a total of 350,000 people.

By law, Lebanese authorities are forbidden from entering the camps.

Palestinian officials in the West Bank rushed to distance themselves from the Fatah Islam group and urged Palestinian refugees in the camp to isolate the militant group, which allegedly first set

up in the northern Lebanese camp last fall after its leader was freed from a Syrian jail.

Written by Scott Neuman with reporting from journalist Leena Saidi and the Associated Press.