Accessibility links
L.A. Nuns Pray For Pumpkin Bread Salvation For years, nuns at the 85-year-old Monastery of the Angels in Los Angeles have helped pay the bills by selling pumpkin bread. But now their oven is broken — and they're broke. The nuns are praying for a new oven to help relieve the financial distress. 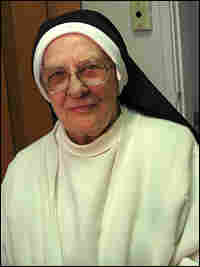 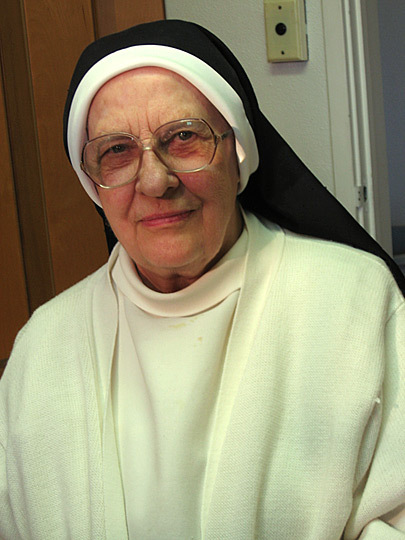 Sister Mary Raymond, mother superior at the Monastery of the Angels in Los Angeles, says medical bills for the elderly nuns drained the monastery's bank account.

The monastery's pumpkin bread sells for $9 a loaf, which could help with strained finances. But the monastery's oven is broken, so the nuns are praying for a new one. Mandalit del Barco/NPR hide caption 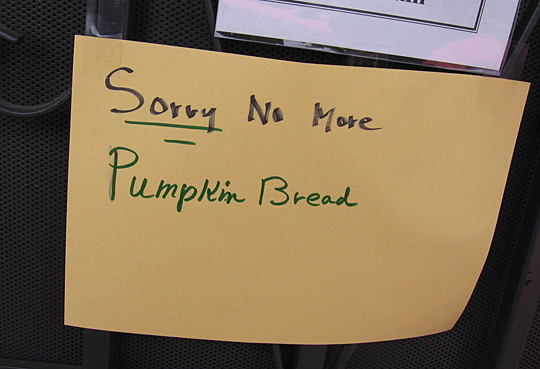 The monastery's pumpkin bread sells for $9 a loaf, which could help with strained finances. But the monastery's oven is broken, so the nuns are praying for a new one.

Get the recipe for the monastery's pumpkin bread.

Down the hill from the famous Hollywood sign in Los Angeles, 20 nuns spend their days praying and singing and baking at a small monastery. Their 85-year-old order endured the Great Depression, but today's economic crisis finds them struggling again.

While the Monastery of the Angels sits in the middle of the hustle and bustle of Hollywood, the Dominican nuns are cloistered from the world in contemplative prayer every morning.

"We're praying for everyone who is suffering in the financial slump," Sister Mary Raphael says. "And I think God let us experience it so we can know what other people are suffering, too."

Sister Mary Raphael, 65, has lived here since she was 18. She's one of the few nuns who leaves the walled confines, but even then only for necessities. She's not impressed by what she sees in the outside world.

"So that was when we began to get really scared," Sister Mary Raymond says.

That's when she sent out a flier warning that the monastery was in serious financial trouble. It reminded the 82-year-old nun of when the monastery started in 1924.

"It's been a long history with the sisters," she says. "Four old ladies — not old, they were young then — had to struggle to get this place going. And they had to go out and beg, just like we're doing now, but they went from door to door."

Faith In The Pumpkin Bread

Today, the sisters are putting their faith in something the monastery's famous for: pumpkin bread. They've been baking and selling it for the past 40 years to help cover expenses.

These days, the nuns get $9 a loaf for their famed pumpkin bread.

L.A. City Council member Tom LaBonge is a big fan. When he visited the monastery the other day, he said he buys loaves to give as gifts during the Hollywood Walk of Fame ceremonies and other special occasions.

"I gave President Obama, when he was running for office, a loaf of bread," LaBonge says.

With bread that popular, you would think it would be a big moneymaker for the monastery. But there's just one hitch: The oven is broken. And without it, the nuns are out of business.

So now, the sisters are doing what they always do: Praying for help from God, which in this case would be a new oven.

Father Vincent Lopez assures them that the Lord will provide, as always.

"Twenty-five years ago, when they were offered to move somewhere else, the cardinal said, 'No, you're needed in Hollywood,'" Lopez says. "Your prayerfulness, your spirituality, your values are needed here."

In the meantime, there's talk of trying to revive the charity garden parties and bridge teas that used to finance the monastery. Sister Mary Raphael says they were attended by Hollywood socialites and celebrities like Irene Dunn and Loretta Young and Jane Wyman.

"They would come and have their retreats here," Sister Mary Raphael says. "They liked it because it was secluded. It was only for them. It wasn't a lot of people trying to get their autographs."

Now the nuns are hoping for new benefactors and counting on congregants like Caroline Harrison.

"It's a respite in this world that's so uncertain," Harrison says. "And there's purity and certainty here. That's special, especially for people who live around Hollywood."

Outsiders may help, but the Hollywood nuns know it's up to them to save their monastery. That starts with a prayer for their daily bread — in this case, pumpkin bread.

The Monastery of the Angels' Pumpkin Bread