Accessibility links
Christine Balfa: 55 Minutes Of Solo Triangle For those who think all Cajun music sounds exactly the same, a new CD tries to dispel that pervasive and dangerous myth. Christine Balfa Plays the Triangle offers up nearly an hour of triangle solos, performed by a woman with an impeccable Cajun pedigree. 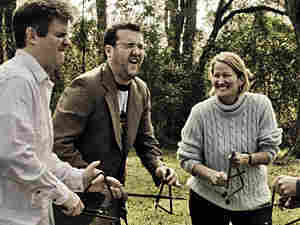 For those who think all Cajun music sounds exactly the same, a new CD tries to dispel that pervasive and dangerous myth. Christine Balfa Plays the Triangle offers up a whopping 55 minutes of pure, unadulterated solo triangle, performed by a woman with an impeccable Cajun pedigree. Balfa is the daughter of the legendary Cajun fiddler Dewey Balfa, and she's the leader of the Cajun band Balfa Toujours.

When she plays with her band, you'll hear her singing and playing guitar, but on her new solo album, it's pure triangle. As the CD jacket promises, there is "absolutely no other instrumentation" on any of the songs, some of which run more than five minutes in length. That's a whole lot of chank-a-chank.

"Triangles have been important to mankind for a long time, ever since Pythagoras and the great pyramids, and cave paintings have triangles on them," Justus says. "Triangles are a big part of our humanity and our culture."

Justus and Balfa realized that by stripping away the other instruments you might expect to hear in a Cajun song — accordion, fiddle and guitar, for example — they arrived at the true essence of this powerful music through a simple instrument that, after all, plays just one note, over and over.

"Melodic or harmonic content just gets in the way of, you know, what the triangle can really ... The nuances that can really be brought out ... You'll notice the nuances and the differences," Justus says. "Each song has a story all its own."