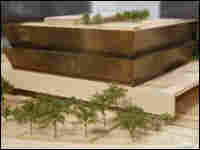 The design concept for the National Museum of African American History and Culture. Smithsonian hide caption 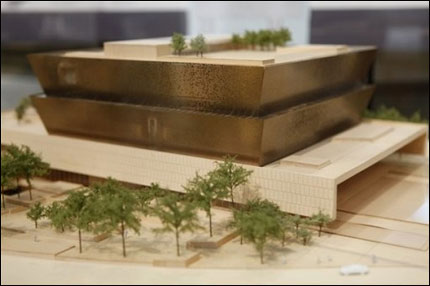 The design concept for the National Museum of African American History and Culture.

An unreachable dream for many generations, the creation of the National Museum of African American History and Culture on the National Mall is coming closer to completion. A Smithsonian jury Tuesday selected the Freelon Adjaye Bond team, along with SmithGroup, to design the museum, slated to open in 2015.

"I think the jury resonated with this notion of expressing both the difficult stories, telling the truth, but also the story of rejuvenation and really the quintessential American story of being able to persevere against difficult circumstances and become successful in this country," says Philip Freelon, president of the Freelon Group architectural firm that leads the project.

The museum will be the first certified environmentally friendly building on the Mall. Resembling an African corona, the museum is topped by a bronze crown surrounding the exhibits that will reflect sunlight throughout the day.

"The building should be exuberant and dignified at the same time, but not necessarily shouting out 'look at me,' " Freelon says.

Other projects designed by members of the group are San Francisco's Museum of the African Diaspora and the Nobel Peace Center in Oslo, Norway.

To hear the full interview with Philip Freelon, click the "Listen Now" button in the upper left corner of this page.