Accessibility links
Children Of Immigrants Less Likely To Get Benefits Children living in immigrant families are more likely to be poor than those whose parents were born in the U.S., but these same children are far less likely to receive public benefits to which they are entitled. Advocacy groups are now trying to help these families navigate the registration process. 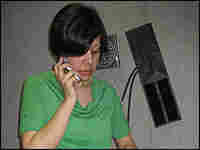 Gloria Ramos works on an undocumented immigrant's application to get health insurance for her citizen children. Ramos works for Baltimore HealthCare Access, a nonprofit group that tries to make sure immigrants in the city get the benefits to which they're entitled. Pam Fessler/NPR hide caption 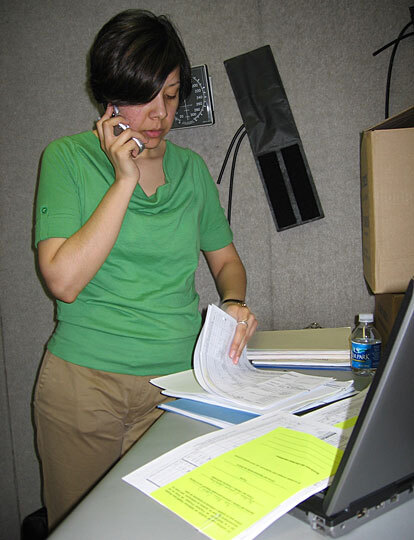 Gloria Ramos works on an undocumented immigrant's application to get health insurance for her citizen children. Ramos works for Baltimore HealthCare Access, a nonprofit group that tries to make sure immigrants in the city get the benefits to which they're entitled.

Immigrants can get health services and help with benefits registration in this van in Baltimore. Pam Fessler/NPR hide caption 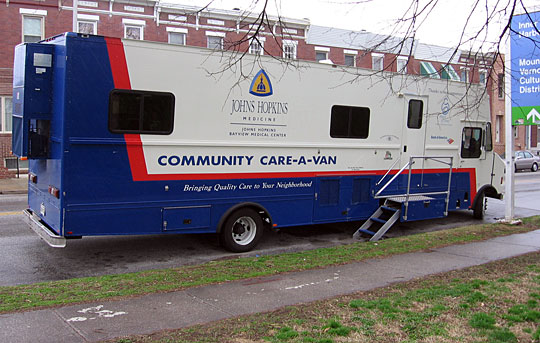 Immigrants can get health services and help with benefits registration in this van in Baltimore.

Pew Hispanic Center Study: A Portrait Of Unauthorized Immigrants In The United States

Children living in immigrant families are more likely to be poor than those whose parents were born in the U.S. But these same children are far less likely to receive public benefits — even though most of them were born in the U.S. and are citizens. This has some people worried about the welfare of one of the nation's fastest growing groups — the citizen children of immigrants.

Adriana, who did not give her full name because she is in the country illegally, recently came looking for help at CASA de Maryland, a nonprofit agency outside Washington, D.C., that assists immigrants. At the time, Adriana, 21, was a few days away from giving birth to her third child. She already had two little boys, ages 1 and 3, and their father had left them months before. And she was homeless.

Adriana and her children had been sleeping in the streets, but the night before, strangers took them in after seeing them out in the near-freezing cold. As Adriana spoke, her youngest son ran around the room, swinging his bottle. He wore one-piece pajamas over a turtleneck shirt. She looked tired and worn.

"She says, 'Today I really need somebody to help me out because the family who helped me yesterday — they can no longer help me, and I have no place where to sleep with my kids tonight,' " said intake specialist Elizabeth Flores, who translated Adriana's Spanish.

Flores said the young woman tried to get housing, food stamps and medical help at local social service agencies. But without a passport, proof of residency or birth certificate for one of her sons, she was having little luck.

"She's living nowhere, so basically she has no address," Flores said. "So they told her she cannot apply."

Adriana's case is complicated by the fact that she's an undocumented immigrant from Mexico. Her children were born in the U.S., but like many citizen children of immigrants, they don't receive the public assistance for which they're eligible.

There are many reasons for this. Some, like Adriana, don't have the necessary paperwork or are confused by the requirements because they don't speak English. Flores says many immigrants in the country illegally also worry about contacting any government agency, even if it's to help their children.

"They don't feel comfortable going there," she said. "They are afraid because they have no documents."

That is a common problem, said Jonathan Blazer, a public benefits policy attorney with the National Immigration Law Center. Blazer said undocumented immigrants are not supposed to be reported to immigration authorities when they apply for benefits for their citizen children. In fact, the Agriculture Department, which administers the food stamp program, basically makes that point in its brochures.

But, Blazer added, "that has not stopped some benefit agencies from threatening to report. And we're living in a hostile time, a period of historic anti-immigrant hostility, and I think that hostility gets reflected within benefit agencies as well."

Blazer said the fears also extend to legal immigrants. Some of them worry that their children's use of benefits — such as food stamps and health coverage — could jeopardize their own legal status or prevent them from becoming citizens because they'll be considered a public charge, someone unable to support themselves.

"This is not true. But many parents would rather play it safe than sorry," said Blazer.

At CASA de Maryland, Flores and her colleagues are still trying to help Adriana and her children. She now has a new baby girl, another U.S. citizen.

Immigrants are understandably wary and confused. Eligibility rules for public assistance often differ from state to state and program to program. And the issue is closely tied to an immigration debate where distinctions are frequently blurred.

Take the discussion earlier this year in the Senate Finance Committee about lifting a five-year waiting period before low-income immigrant children could be covered under the State Children's Health Insurance Program, or SCHIP.

"What we don't want is an unintended consequence of attracting people here that can come to get on the government dole," said Nevada Republican John Ensign. Like other opponents of expanding eligibility for the program, he said he was worried about the long-term costs.

"You know how many women bear children in this country?" Ensign asks. "They come over here, because the incentive is there. They know they can get citizenship for that child. So they come across the border. We have incentives that people take advantage of to come into this country."

But the proposed change — which was later adopted — didn't apply to the children Ensign was referring to. Anyone born in the U.S. is a citizen, and their eligibility was never in question.

Still, immigrant advocates say restrictions on some immigrant families have a chilling effect on all of them. When Congress overhauled welfare in 1996, it imposed a five-year waiting period before legal immigrants could receive public assistance. Immediately, there was a big drop in food stamp participation by the citizen children of immigrants — even though their eligibility hadn't changed at all.

In the tight quarters of a mobile medical van in downtown Baltimore, Gloria Ramos works on an undocumented immigrant's application to get health insurance for her citizen children. Ramos is with Baltimore HealthCare Access, a nonprofit group that tries to make sure immigrants in the city get the benefits for which they're entitled.

"They get very nervous. They don't really know the process," said Ramos. "So for a lot of them it's very intimidating to complete the application."

Ramos said that language is a big barrier, and she tries to help non-English speakers navigate the bureaucracy. She also tries to dispel a lot of myths.

Immigrant advocates say more such outreach programs are needed. About half of all children of immigrants now live in low-income families, compared to about a third of children whose parents are natives. Kathy Westcoat, president of Baltimore HealthCare Access, said there could be a big price to pay down the road if low-income children of immigrants don't get the help they need — one reason her group has started offering prenatal care to undocumented immigrant women.

"These are American-born children who are going to likely be on the Medicaid program. So, you know, if you think about this, if a woman goes without prenatal care, that baby is much more likely to be born with problems. And the Medicaid program, or the taxpayers, ultimately have to pay more," said Westcoat.

But it's sometimes a difficult case to make — that it's better to spend money now, rather than later — especially in tough economic times.