Accessibility links
Ethnic Divisions Complicate Sudan's Census Troubled Sudan is attempting a comprehensive, nationwide census. Like so much else in Africa's largest nation, it isn't easy. Among other things, the political rivalry between north and south threatens a useful count. 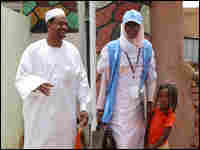 A census enumerator is welcomed by a Sudanese family in Khartoum last year. The census is complete, but results have not been released amid the political distrust among rival Arab Muslims in the North and Christian blacks in the South. Isam al-Haj/AFP/Getty Images hide caption 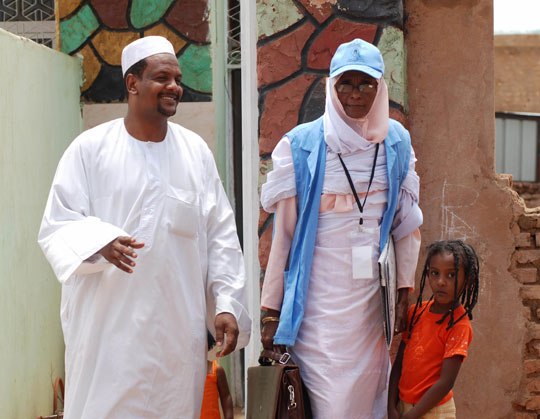 A census enumerator is welcomed by a Sudanese family in Khartoum last year. The census is complete, but results have not been released amid the political distrust among rival Arab Muslims in northern Sudan and Christian blacks in the south.

There's a reckoning going on in Sudan — an attempt to count all of its people. And like most everything else in this troubled nation, it is not easy.

Africa's largest country has completed a nationwide census, only the fifth since it gained independence in 1956.

For the first time, southern Sudanese were among the census enumerators. So, unlike past efforts, this comprehensive head count promises to be fairly accurate, telling the Sudanese people for the first time ever who they are and how many they are.

But just what the census will show may depend on who is reporting the numbers.

Political leaders, not census officials, will determine the release of the results, observers say.

The stakes are unusually high in a nation where the predominantly Arab Muslim North fought a 20-year war against the largely black Christian South.

Both the Arab Muslims and the Christian blacks claim to be in the majority. The census could determine which group has the larger numbers, how the population is distributed and where natural voting constituencies lie.

The results are crucial because in 2011, southern voters are scheduled to decide a referendum on whether Sudan remains one country, or splits into two.

The census-takers fanned out last year, and the results were to be available several months ago. But just about everyone in Sudan is stingy with the facts.

Count Complete, Results Are Not

"I'm not authorized to release that information. I'm not the right person to do it," says Isaiah Chol, head of the Commission for Census and Statistics in semiautonomous southern Sudan.

The census-takers knocked on hundreds of thousands of doors and huts, interviewing millions of people. The results were due at the end of last year. Then, they were due in February.

"Even as we speak, the problem is from the North, not the South. So they delayed," Chol says. "It is the presidency that will have a final say. It is a political decision, of course. The census is political. Everything is politicized in the Sudan."

Sudan's President Omar al-Bashir and his counterpart Salva Kiir, the ruler of southern Sudan and a national vice president, are fully expected to fiddle with the numbers. Al-Bashir and Kiir are former wartime adversaries who now share a fragile alliance in a unity government.

In census matters, the two leaders may conceal as much information as they share. Each side is suspicious that the other is attempting to skew their census numbers to their favor. And both sides are said to be preparing for the possibility of another war.

The political intrigue will probably obscure the fact that the South appears to have done a fairly thorough job of counting and accounting for their figures, according to observers.

Southern officials say they have a paper and computer trail showing where every census document is and how it was handled.

Rebecca Hoffman, the chief American technical adviser for the census in the South, says census-takers probably reached 89 percent of the population — a remarkable figure considering that southern Sudan is nine times the size of Pennsylvania and has less than 100 miles of paved road.

"When you consider the lack of infrastructure, the logistical problems, the seasonality — which renders some parts of this country absolutely inaccessible — it's an amazing achievement," said Hoffman of the U.S. Agency for International Development's Southern Sudan Census Support Program.

Northern Sudan reportedly has done most of its counting by hand and provided little, if any, training to workers handling the forms. That makes accounting for anomalies more difficult, which is the stage of the process in Khartoum now.

"They're analyzing the complete data set to make sure everything seems reasonable. They're verifying that anything that looks surprising, they have a plausible explanation for. Because you don't just produce a number and say, 'Well, I don't know.' " Hoffman said.

Officials from northern Sudan declined to answer questions for this story about the status of their census.

But Chol and others in southern Sudan say that worrying signs are coming from the North.

Hundreds of thousands of people who live in displacement camps in Darfur refused to participate in the census. Yet officials in southern Sudan believe that officials in the North will distort the numbers to reflect Darfur as the North's most populous region, with a large Arab population.

When officials from southern Sudan asked to see the raw data from the North, officials there refused to hand it over.