Accessibility links
Bringing Up Baby, As Music Lovers Might Music may or may not make babies smarter. But for new parents who are passionate about music, picking the first song their children will hear upon entering the world remains of great importance. A DJ, a critic and a musician talk about what they played for their newborns.

Die Kunst der Fuge (The Art of the Fugue), for keyboard (or other instruments), BWV 1080

Note: The radio story features "Contrapunctus 9" from the Emerson String Quartet's recording of The Art of Fugue. 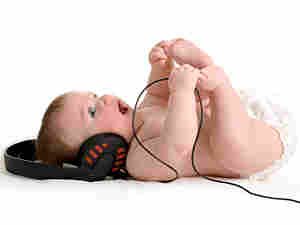 For some parents, it's hard to decide on the first song their child will hear upon entering the world. Thomas Vogel/iStockphoto.com hide caption

Doug Schulkind hosts a Friday morning music show on WFMU, a noncommercial radio station in New York City. A self-described music obsessive DJ, he plays every kind of music he can get his hands on. When his wife went into labor, he brought his boom box and a stack of CDs along to the hospital.

When the big moment arrived, he knew what song he had to play.

"I think the music found me," he says. "And the music that was playing when I first remember holding our new daughter wasn't any accident."

She was one day old. Her first music: John Coltrane's A Love Supreme.

"To me, there isn't any other piece of music I know that can come closer to that sense of wide-open heart and grace," Schulkind says. "And it's so humble and loving and transcendent that it seems equal to that incredible moment of holding your child for the first time."

Parents preparing for the birth of a child have a lot to think about, from choosing the right name to figuring out child-care arrangements. For people who are passionate about music, picking the first song their newborn will hear upon exiting the womb is nearly as important.

Jeremy Eichler had just brought his newborn son home from the hospital when he realized he had a momentous decision to make. Eichler is The Boston Globe's classical-music critic.

"It did actually feel like there was a lot of pressure as I was standing in front of our CD library," he says. "It was fairly paralyzing to think what would be the appropriate music to play for someone's very first-ever taste of music. And I ended up choosing Bach's Art of Fugue, in an arrangement for string quartet.

"I thought, 'Why not begin at the summit?' Bach's Art of Fugue is one of the pinnacles of his art. He's taking a single subject and manipulating it in many different ways. I just thought it would be like honey for the infant mind."

Babies can recognize surprisingly complex rhythms, and are sensitive to the differences between consonant and dissonant music.

"It's tempting to think of all of this as a giant exercise in projection, because of course I chose this music because it's music that I love," Eichler says. "And yet, scientists are now telling us that infant music perception is actually very sophisticated, much more so than what you'd think when you're looking at a cute little blob sitting on your sofa."

So how did Jeremy Eichler's son respond to Bach's majestic musical architecture?

"If memory serves, he was absolutely intrigued for the first few bars, and then pretty quickly closed his eyes. Now, in that moment, I'm sure I was tempted to read that as a kind of wise, meditative state of listening, but in fact, I think most likely he just fell asleep."

Jazz singer Rene Marie started singing to her two sons long before they were born. But it wasn't any particular song.

"Because I sing constantly," she says. "And so they'd been hearing me sing the whole time they were in womb. But after they were born, I started writing lullabies and singing them to them."

When they got a bit older, Marie would often wake her boys up in the morning with Aaron Copland's "Fanfare for the Common Man." But she kept singing to them, too. It was a way she conveyed her love to them.

"And I wanted them to know that music doesn't come from a record," she says. "It comes from somebody singing. And they will quiet down and just stare at you. I love that feeling and having that impact on another human being. I just love that. "

Marie's two sons are in their early 30s now. And she does most of her singing in concert halls and nightclubs. In fact, it was her older son who convinced her to pursue singing as a career — so others could hear her voice, too.