Accessibility links
Britain's Favorite Song: 'A Whiter Shade Of Pale' Procol Harum's "A Whiter Shade of Pale" has just been named Britain's most-played song in public places over the past 75 years. The song's evocative organ melody lives on in music history despite a legal battle over royalties. 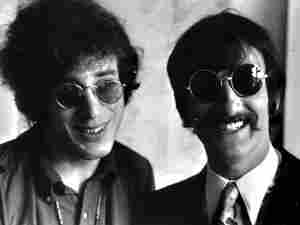 Procol Harum's psychedelic classic "A Whiter Shade of Pale" has just been named Britain's most-played song in public places in the past 75 years, beating out Queen's "Bohemian Rhapsody" and "All I Have to Do Is Dream" by The Everly Brothers. The song spent six weeks at the top of the charts when it was released in 1967. Last year, it caused an angry lawsuit over royalties involving its haunting and memorable organ solo.

There's even a new incarnation of the song by British singer Paul Potts, who won 2007's reality talent show Britain's Got Talent. Potts' new CD is full of covers of famous pop tunes, translated into Italian. He sings an adaptation called "Senza Luce," or "Without Light." It's a song that raises the question: Do the lyrics possibly make any less sense in Italian than they do in English?

To read why All Songs Considered's Bob Boilen listens to "A Whiter Shade of Pale" on a rainy day, click here.

To watch the video for "A Whiter Shade of Pale," click here.