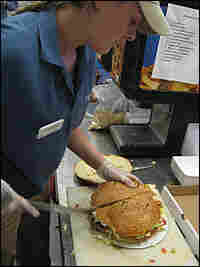 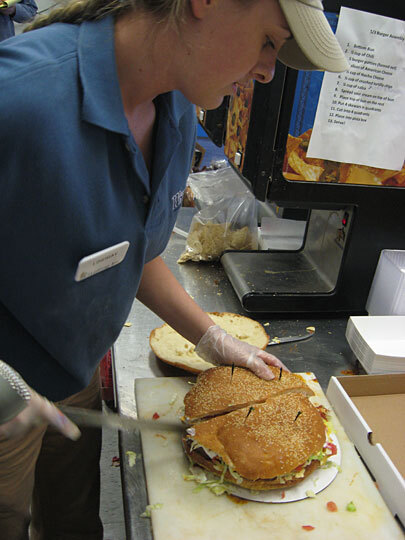 Watch A YouTube Video Of The Fifth Third Burger Being Prepared 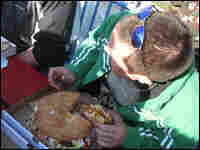 The massive Fifth Third burger weighs in at more than 4 pounds, and has the same number of calories as nine Big Macs. Dustin Dwyer for NPR hide caption 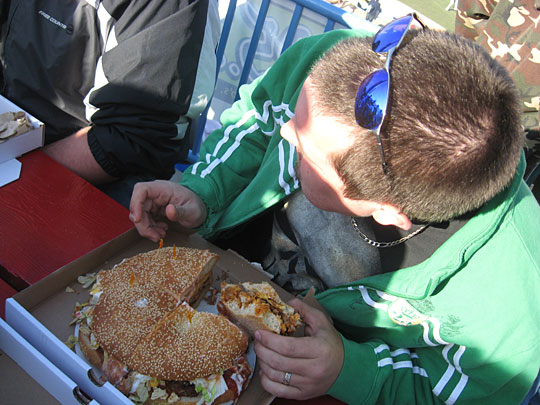 The massive Fifth Third burger weighs in at more than 4 pounds, and has the same number of calories as nine Big Macs.

It's made with five patties plus chili, American cheese, nacho cheese, tortilla chips, salsa, lettuce, tomato and sour cream — all piled on an 8-inch bun.

The mammoth meal weighs more than 4 pounds. And, even in this era of scaling back, plenty of people took on the burger by themselves.

This monster of a burger is called the Fifth Third burger. It has five 1/3-pound patties of beef. But it also takes its name from Fifth Third Ballpark, which is named after Fifth Third Bank, based in Cincinnati.

Fifth Third Bank has had some severe financial losses because of the downturn in the housing market. It bet big on houses in Michigan and in Florida, where there have been a lot of foreclosures. And Fifth Third has received $3.4 billion from the federal government to stay afloat. So, the Fifth Third burger could also be called the bailout burger.

"It hurts, it hurts," says Ray Boze after he finished an entire Fifth Third burger on his own.

It's the caloric equivalent of nine Big Macs.

Boze started eating before the first pitch, and he didn't finish that last excruciating bite until the ninth inning.

Boze was one of more than a dozen people who ate the entire burger on opening night.

The burger has become the star of the West Michigan Whitecaps operation.

"It's been a whirlwind for us, for media," says Mickey Graham, the head of marketing for the Whitecaps. "For an organization like us that has to scratch and claw to get our name out there, it's been crazy to get all this international attention."

Graham says the Whitecaps have a history of offering some oddball menu items at their concession stands, including giant turkey legs and fried Twinkies.

The massive Fifth Third burger comes at a time when Americans are being told it's time to scale back to smaller vehicles, smaller mortgage payments, smaller meals and smaller expectations.

This is a burger that's so big, it has to be served in a pizza box with an open top. And people love it.

"You turn on the news and everything, and some people don't like what they're hearing, but some people still want to talk about fun things that are happening in life," says Graham. "And, so, I think that's one of the reasons this has caught on."

The Fifth Third burger isn't just about excessive consumption: The Whitecaps are marketing the burger as a family meal. It comes sliced into four pieces. For $20, it's a relatively cheap dinner at the ballpark.

Marnie Joostberns bought a burger to share with her nephews Noah and Nate Junker.

"This was Nate's big thing. They talked about this in current events class — the Fifth Third burger," Joostberns says.

So you can see the Fifth Third burger as a symbol of American excess, or you can see it as just a fun time at the ballpark. But it's certainly uniquely American. And the worst economic downturn since the Great Depression can't stop that.