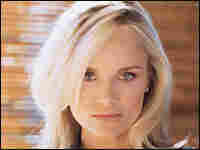 Kristin Chenoweth started her career singing at church before moving on to Broadway. Simon and Schuster hide caption 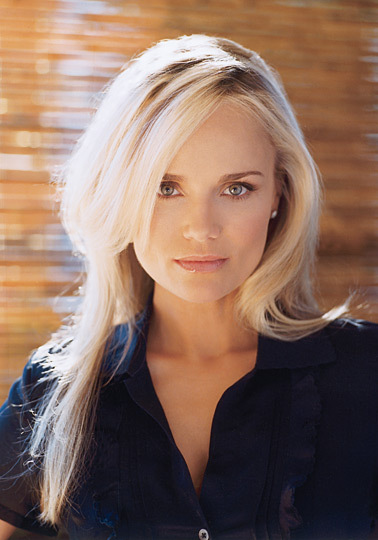 Kristin Chenoweth started her career singing at church before moving on to Broadway. 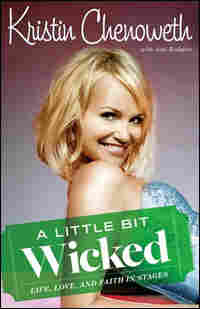 Kristin Chenoweth is an actress, singer and dancer whose roles have taken her from the land of Oz to the West Wing of the White House. Now the former Miss Oklahoma runner-up details her journey from stage to screens small and large in her autobiography, A Little Bit Wicked.

Chenoweth got her start singing at church, and later studied theater and opera performance before heading to Broadway.

In 2003, she starred as Glinda in the Broadway musical Wicked, a performance that earned her a Tony Award nomination for Best Actress in a Musical.

In an interview with Dance Spirit magazine, Chenoweth spoke about the challenges of singing and dancing in Wicked:

"You've got to find ways to breathe while you're dancing so that when it comes time for you to stop and sing again, you have it," she said. "To prepare, I do a lot of aerobic activity. Many times at the gym, people will look at me because I'll be on the treadmill humming."

Soon after Wicked, Chenoweth began a recurring role on Sesame Street as Elmo's pal, and later joined the cast of The West Wing as Annabeth Schott, public relations wizard. In 2008, she was nominated for an Emmy Award in the Best Supporting Actress category for her work on the ABC television series Pushing Daisies.

In 2005, Chenoweth returned to music, releasing a CD titled As I Am, a collection of Christian songs, which she conceptualized after the Sept. 11 attacks.

Chenoweth continues to take varied roles in films across genres, including Bewitched in 2005 and The Pink Panther and Running with Scissors in 2006.

I face myself in the full-length mirror, stability in one hand, sex in the other.

The white Armani gown is the dress every little girl dreams of. A lot of big girls, too. A line of blushing attendants, all picture-pretty, clutch their bouquets of roses and baby's breath, each on the arm of a dashing, tuxedoed counterpart. My best always-a-bridesmaid buddy Denny Downs is looking at me with wide, moist eyes, telling me how perfect it all is... but suddenly I'm not sure.

A moment ago, I was ready to commit myself to the faithful friend who's supported and stood by me all these years. Then Jimmy showed up, and everything became a question. Now, here I am at the eleventh hour, wondering what might happen, who will I be, if I allow my passion to be swayed by this dangerous bad boy. Crystallized moments like this one arise in every woman's life. Moments of truth in which she makes the choices that guide her destiny. Moments that ultimately write the story of her.

Sugar or spice? I agonize. Naughty or nice?

Sensible angels whisper in my ear, but the runaway bride in me is getting restless. I am a type A "leap and a net will appear" risk-taker, and if I trust that God made me this way for a reason, then I have to believe that the risk will be worth it in the long run. Experience has taught me that we all stumble and fall; faith assures me that He'll be there to catch me when I do. My heart speaks, and I listen.

Jimmy Choo, that is. A fabulous pair of four-inch platform slingbacks. Setting aside the safe-and-sane character shoes I was planning to wear onstage tonight, I cast my lot with the bad boy. Oh, I know what you're thinking, and, yeah, it's not exactly Sophie's Choice. But this is Oscar night. I'm about to step out onstage in front of thousands of people — friends, colleagues, peers, people I hope and dream of working with — plus my parents and everyone else watching the live broadcast on television.

People keep reminding me that billions — with a b as in bombastic and boy howdy! — yes, billions of people all over the world will be tuned in. Even in the coziest venues, performers can and do get hurt onstage all the time. There's a broken toe for every light on Broadway. But I'm not as concerned for myself as I am for the burgeoning cast of backup dancers. This is a huge shot of résumé adrenaline for most of these kids; I don't want it to turn into some tragicomic YouTube video labeled "Cheno Falls on Ass." On the other hand, when you're four feet eleven inches you get pretty comfortable in heels.

"A nice pair of Jimmy Choos never hurt anyone," I tell my friend Denny, but I take the precaution of having the soles rubbered for slip-resistance. (Faith is fine, but the Lord helps those who help themselves, right?)

I'll be performing "That's How You Know," one of three Oscar-nominated songs written by Alan Menken and Stephen Schwartz for Disney's frothy fairy tale Enchanted. As Tilda Swinton collects the Best Supporting Actress Oscar for Michael Clayton, the backstage cavern turns into an anthill of scurrying crew members preparing for my number, which is being staged in full-on Broadway showstopper style. Joining me on the sweeping two-story set is a village-size cast including half a dozen dancing brides niftily accessorized with dancing grooms, quick-stepping waiters, acrobatically inclined construction workers, happy townies, multiculti mariachis, and (putting us indisputably over the top) a marching band. Against a miniature backdrop of Manhattan, a battalion of gorgeous guys will form sort of a hunkpowered elevator and pass me bodily off an ornate, ten-foot-tall bridge.

A great song. A magical night. Gown by Armani and travel by hunk-o-vator. I am in grave danger of thinking it doesn't get any better than this when someone tells me, "George Clooney is on the front row." I don't ask who else is on the front row. Is there anyone else?

George Clooney needs to know that he and I are perfect for each other. We would be instantly matched on eHarmony.com. I can already see us in that ad campaign, oozing adorable, giddily telling the story of our first kiss. Happily ever after, cue Chaka Khan, roll credits. He is my Mr. Right. The problem is, I'm still in love with Mr. Writer, a man who is more likely to show up in a "Falls on Ass" video than an "Everlasting Love" commercial. Truth be told, eHarmony would not encourage me to share so much as a cab uptown with this guy. But of course this is precisely what makes him irresistible.

Never for a moment did I even fantasize that Aaron Sorkin was Mr. Right. From the day we met, he was Mr. Sets My Brain on Fire, then he evolved for a long, lovely spell into Mr. Makes Me Sing REO Speedwagon in the Shower, but there was always an undercurrent of Mr. You Are Seriously Pushing Your Luck Here, and I eventually found myself doing the ol' step-ball-change with Mr. Why Am I Banging My Head Against This Wall? Instead of coming up with a cutesy Hollywood powercouple name for us — "Sorkoweth" or "Chenorkin" — the tabloids wearily call us "on again/off again," which means we periodically put each other through a wrenching spate of separation, but I keep reinstating him as Mr. Might Actually Be Worth the Trouble. We are now "off again," and it's painful to not share this amazing moment with him. I love the man, and whatever happens or doesn't happen between us in the long run, I always will.

"It's in God's hands," I tell my father whenever he shakes his head about it.

The only thing I can say with utter certainty is that come what may, my feelings for George Clooney will remain unsullied. Whatever curtains rise and fall, the "Kristlooney" dream lives on.

Hosting the Oscars tonight is Jon Stewart, who's been onstage riffing about the bitter writers' strike that was recently resolved. His wry, wisenheimer humor is good medicine for our cruel but tenderhearted community.

"Welcome to the makeup sex," he said at the start of the show, and I felt a twinge of knowing exactly what he was talking about.

Aside from my periodic reunions with Mr. If Loving You Is Wrong, I Don't Wanna Be Right, I've been holding my breath through the strike, terrified for the fate of Pushing Daisies, this beautiful baby bird of a TV show I've been doing. With the strike ended, we are all breathing again and anxious to get back to work this summer. Before I resume shooting the show, I'll spend the spring in New York, shoot a movie in Minneapolis, squeeze in some family time with my far-flung loved ones in Texas, Denver, and Oklahoma, do a concert with the Chicago Symphony, and give a special benefit performance for a friend in Manhattan — all of which keeps me pleasantly occupied and comfortably distanced from L.A. with all its potential complications and painful reminders.

I make my way backstage in my Jimmy Choos. I'm getting nervous. This doesn't happen to me much anymore. Like everyone around me, I'm a seasoned pro. Stage fright is a thing of the past. But tonight, as I prepare to step onstage, a hollow, little ice cube of doubt forms in the pit of my touchy stomach. I close my eyes. Heavenly Father...

I don't have to say anything else. He knows.

Adding one last dash of adorable to the Enchanted number is Vanessa Williams's little daughter Sasha, so Vanessa is here, helping her get ready. She gives me a good-luck scrunch and tells me, "Sasha's going to be right there when you look at her."

It's good to have another Broadway girl backstage. There's no unnerving a woman who's conquered the pageant circuit and delivered eight shows a week. She's a glam-cat paragon of strength and calm. Sasha's learning early what it took me years to understand.

Crew hands hustle out the set pieces. The hunks and I brace ourselves for places.

"You're going to knock it out of the park," he assures me.

Jon smiles at me without a trace of wisenheimer. "Just get out there and do what you do."

Excerpted from 'A Little Bit Wicked' by Kristin Chenoweth. Copyright © 2009. Excerpted by permission of Touchstone/Simon and Schuster. 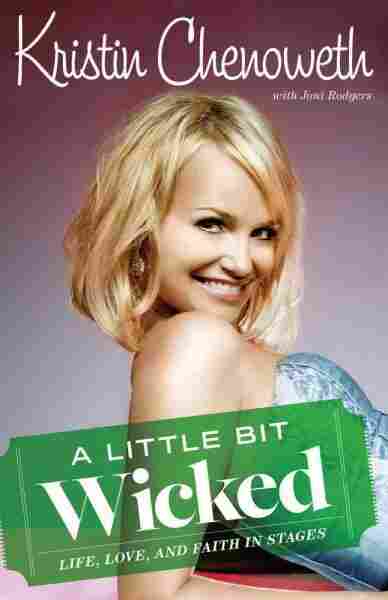 Life, Love, and Faith in Stages

by Kristin Chenoweth and Joni Rodgers