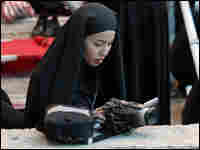 American journalist Roxana Saberi takes footage on June 3, 2004, during a ceremony on the outskirts of Tehran to mark the 15th anniversary of the death of Ayatollah Ruhollah Khomeini. Behrouz Mehri/AFP/Getty Images hide caption

American journalist Roxana Saberi takes footage on June 3, 2004, during a ceremony on the outskirts of Tehran to mark the 15th anniversary of the death of Ayatollah Ruhollah Khomeini.

Roxana Saberi, the 31-year-old American journalist being held in an Iranian prison, is awaiting a verdict after a one-day trial on espionage charges Monday. Her trial stirred controversy in Washington over the state of relations between the U.S. and Iran.

Saberi was arrested in Tehran in January and accused of working without press credentials. Her situation became far more serious, however, when an Iranian judge accused her of espionage.

"When I heard about Roxana, I felt so bad because there is no prisoner on the planet that when faced with charges like that accepts the charges immediately," says Iranian journalist Omid Memarian, who was imprisoned in 2004 for 56 days.

Memarian, who spent most of the time in solitary confinement, was tortured with sleep deprivation and humiliated by the prison guards through various tactics.

Saberi was born in the U.S.; her mother is Japanese and her father is Iranian. She holds both U.S. and Iranian passports.

"By definition Iranian-Americans are probably more vulnerable, because they do hold an Iranian citizenship. They are subject to the laws of Iran in a way that a foreigner isn't. Yet the fact that they are American citizens as well allows, if that's the intention, for a signal to be sent to the U.S. at the same time," says Gerald Seib, executive Washington editor for The Wall Street Journal.

Seib was arrested for four days in 1987 and accused of espionage while covering the Iraq-Iran war.

"There are things you know you cannot cover but at the same time there are topics that you do not know that can be a problem for you to cover or not. So the red lines are not clear for journalists," says Memarian.

Both Secretary of State Hillary Clinton and President Obama have called for Saberi's release. Saberi has reported for NPR and the BBC.

Hear the full interview with Omid Memarian and Gerald Seib by clicking the "Listen" button in the upper left-hand corner.