Accessibility links
When Is Blackface OK? A television newscaster caused an international uproar after he went on the air in blackface to offer a commentary after President Obama's visit. Gul Tuysuz, of The Hurriyet Daily News and Economic Review, talks about the incident, and how it is being perceived in the international community.

A television newscaster caused an international uproar after he went on the air in blackface to offer a commentary after President Obama's visit. Gul Tuysuz, of The Hurriyet Daily News and Economic Review, talks about the incident, and how it is being perceived in the international community. 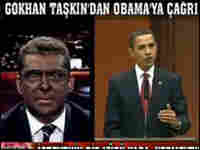 Now we go to Turkey, where a television newscaster has caused an international uproar after he went on the air in blackface to offer some commentary after President Obama's recent visit. Turkey was the last stop on Obama's European tour earlier this month.

The video has sparked a furious reaction online, especially in the U.S., where many wondered whether the newscaster, Gokhan Taskin, was mocking the U.S.'s first African-American president, but others, including us, wondered whether there was some other message that was lost in the translation, as it were.

So we've called upon freelance reporter Gul Tuysuz, who is in Istanbul. She writes for the Hurriyet Daily News and Economic Review. She's on the line from Istanbul. Thanks so much for joining us.

Ms. GUL TUYSUZ (Hurriyet Daily News and Economic Review): Thank you for having me.

MARTIN: First, could you tell us about this newscaster and tell me about the program he appears on, if you could put it in an American context for us. Is it considered serious news?

Ms. TUYSUZ: The newscaster's name is Gokhan Taskin, and he specializes in this sort of tabloidy, sensational newscast. For example, early in 2008, when Turkey was going through this head-scarf debate, he went on his program again, he took a head scarf and he put it on and was saying look, as a man, I'm putting this on. And it wasn't mocking the process, but it was just, again, sensationalist, tabloidy sort of journalism.

MARTIN: Kind of over the top.

Ms. TUYSUZ: Yeah, which is actually what his last name means, as well.

Ms. TUYSUZ: Over the top, yes.

MARTIN: Tell me about the context of what he was saying. Now, he was delivering a commentary, and he used a Turkish saying. Now, I just want to play a short clip, and I want you to translate for us. I mean, obviously we're not going to play the whole commentary, but I want to play a little bit of it, and then I'm going to ask you to tell me what he was talking about. Here it is.

MARTIN: And for those who want to see the whole thing, we'll have a link on our Web site, but Gul, tell me what he's talking about here.

Ms. TUYSUZ: Translated, he's saying: Welcome, Mr. Obama. You are in Ankara today. Your manner, your attitude, the goodwill on your face was reflected on your face, and you warmed our hearts with it. But we, as Turkey, has some concerns. America always asks things of us and always gets what they want.

And he starts sort of playing off of this. He's saying let's not have you have you have your face darkened because you're not going to grant us our wishes, which are the Armenian issue. So for congress not to recognize the Armenian genocide. And he's also asking for President Obama to speed up the IMF loan process, as well.

Ms. TUYSUZ: The word dark doesn't necessarily mean black. They're sort of synonymous with each other, but having your face darkened is being embarrassed. It's being red-faced or humiliated.

Turks don't have the context for blackface that Americans have. You know, here it's not - we don't recognize the fact that there was this really upsetting thing that sort of spawned off of blackface. It's not in the cultural context.

MARTIN: So do you think that it has gotten back to him that many people are disturbed by this, I mean, to the point where the U.S. ambassador to Turkey had to issue a statement downplaying it, saying this wasn't intended as an insult? Do you think - the people who have time to follow such things, of course, are they surprised by the reaction that this has gotten in the U.S.?

Ms. TUYSUZ: After journalists in the U.S. picked up on this, he went on to say to Turkish journalists that he didn't mean to offend anyone and that it was just the way that he was reporting the news, and he apologized for having upset people.

He knew he was going to get a reaction, but he didn't necessarily know what blackface meant. No one had said that it's racist. You know, no one in Turkey that was watching it really saw it as being a racist commentary towards President Obama or towards African-Americans. They just saw it as him up to his usual tricks again.

MARTIN: Gul Tuysuz is a freelance reporter for the Hurriyet Daily News and Economic Review. She was kind enough to join us on the line from Istanbul. Thank you so much for speaking with us.

MARTIN: Coming up, Virginia Tech professor Lucinda Roy on why she thinks it can happen again.

Ms. LUCINDA ROY (Professor, Virginia Polytechnic University): The school is an amazing stage for people who want to make some very violent statement, and I think it can be particularly tempting to young men who are very angry.

MARTIN: That's coming up next on TELL ME MORE from NPR News. I'm Michel Martin.