Accessibility links
Jason Isbell: Country-Soul Gumbo : World Cafe Since leaving his post as guitarist of Drive-By Truckers, Isbell has pursued his own creative voice on two solo albums. The latest, a self-titled release with his new band The 400 Unit, lays down percussion-heavy Southern roots-rock with the perceptive, character-driven songwriting that distinguishes Isbell as one of the best lyricists around. 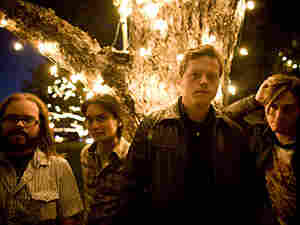 After six successful years of recording and performing with Drive-By Truckers, guitarist and songwriter Jason Isbell left the band to explore his own musical identity.

His first solo album, Sirens of the Ditch, revealed a softer Southern blues sound, mixed with country-rock. Isbell's transformation from guitarist to lone frontman shines on his new album, Jason Isbell & The 400 Unit, a warm and gritty country-soul album disc that displays confident writing while effortlessly swinging between heavy percussion and vintage soul.

In this interview, Isbell discusses his father's influence on the album and describes how the musical legacy of his hometown (Muscle Shoals, Ala.) contributes to the band's style.