Accessibility links
Shemekia Copeland: A New Age Of Blues : World Cafe Ever since the new "Queen of Blues" made her debut at age 19, she's been working to re-create the blues for a new generation. On Copeland's latest release, Never Going Back, she incorporates pop and jazz into her soulful singing, which conveys a message of inspiration and empowerment for the modern woman.

"Never Going Back to Memphis"

Blues has touched Shemekia Copeland's entire life. As a child, she often tagged along with her father, the legendary blues guitarist Johnny Clyde Copeland, on tour. By 19, the soulful intensity of her debut album, Turn the Heat Up!, established her as a promising young artist on the jazz and blues scene. 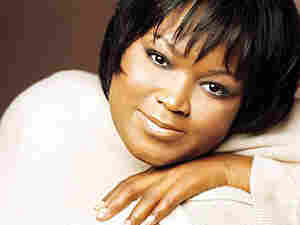 Though not yet 30, the passionate singer has already won several blues awards, received a Grammy nomination and opened for acts such as The Rolling Stones, B.B. King and Taj Mahal.

Copeland continually strives to strengthen her singing and grow as a performer. While her fifth album, Never Going Back, remains true to her blues roots, she takes a step further by experimenting with new styles of music and approaches to singing. Her songs touch on stories of empowered, modern women, and include a silky cover of Joni Mitchell's "Black Crow."

In a session with host David Dye, Copeland elaborates on her growth as an artist and shares memories from her life-changing trip to Iraq during Bluesapalooza.