Accessibility links
SpongeBob: Still Soaking Up Ratings After 10 Years Ten years after SpongeBob SquarePants made its debut on Nickelodeon, the show continues to be a phenomenal hit. President Obama, Scarlett Johansson and LeBron James are among the character's legion of fans. 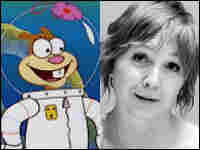 Carolyn Lawrence, the voice actress who plays Sandy the Squirrel, says she shares a lot in common with her character. Geoffrey Gardner/Nickelodeon Composite hide caption

SpongeBob SquarePants makes no sense. Created by marine biologist turned animator Stephen Hillenburg, the character lives in an underwater pineapple in a place called Bikini Bottom. He keeps company with a lumpy starfish named Patrick, a cranky neighbor named Squidward, a greedy crab of a boss and an evil plankton.

The show is like The Honeymooners meets The Flintstones — on speed. Brown Johnson, the vice president of animation for Nickelodeon, says it was a fight to get SpongeBob on the air.

"Certain parts of the business at Nickelodeon were like, 'Oh no. It'll never be successful. It's about a sponge. What's that? It's yellow. That's a bad color,' " she recalls.

But now, 10 years after SpongeBob made its on-air debut, the show is still wildly popular. One week last month, nine of the top 20 shows on cable were SpongeBob cartoons. According to Nickelodeon, 45 million people over 18 watch the show every month. President Obama, Scarlett Johansson and LeBron James are among the character's legion of fans.

SpongeBob is so popular that Nickelodeon squeezes everything it can out of it. You can buy SpongeBob underwear and SpongeBob macaroni and cheese.

"If we are sort of down in the ratings we sort of put it everywhere," says Johnson. "Sometimes it's on eight times a day."

"You watch when you're a little kid and you like it because it's pretty and it's funny and they do goofy things," says Thompson. "You watch it again when you're 10, and suddenly all of the new mysteries of life begin to pop up in here as well. And then you watch it when you're a 21-year-old in a frat house and suddenly there's a whole other quality that appeals to you."

SpongeBob the character is an eternal optimist — though one prone to melodrama. Tom Kenny, who provides the voice of SpongeBob, calls the character "pretty bipolar ... his highs are very high but he can also be dashed into the most abject sorrow."

Kenny says he'll gladly be the voice of SpongeBob for another 10 years.

"Even if the show doesn't go for 10 years, I'll be the guy pushing a grocery cart around with a tinfoil hat on his head going 'Hey you know who I used to be?' " he jokes.

What do the actors who play SpongeBob, Sandy and Squidward look like without the animation? Tom Kenney and fellow voice actors take us behind the scenes.