Accessibility links
A Look At Mexico's Drug Cartels A collection of drug cartels has carved up territory throughout Mexico and waged war on each other and the Mexican government. The violence has spilled across the border into the United States. Here's a look at the major players.

A Look At Mexico's Drug Cartels

A Look At Mexico's Drug Cartels 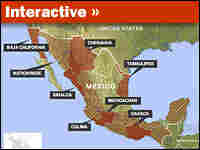 Mexican cartels have now displaced Colombian groups as the dominant cocaine traffickers in the world. Several drug cartels in Mexico have a part in the process and often war over territory. hide caption

The most urgent issue on the common agenda of President Obama and Mexican President Felipe Calderon in their meeting Thursday: curbing Mexico's vicious drug war.

A collection of drug cartels has carved up territory throughout Mexico and waged war on each other and the Mexican government. The violence has spilled across the border into the United States.

More than 10,000 people have been killed in Mexico in drug-related violence since Calderon deployed the army against the cartels in late 2006.

Before he left for Thursday's visit to Mexico, Obama struck a blow against three of the drug cartels that are battling the Mexican government. The president authorized federal officials to seize any assets the cartels may have stashed in the United States. His order also cracks down on Americans who help the gangs smuggle drugs, launder money or obtain high-powered weapons.

Here's a look at the cartels named to the kingpin list:

Sinaloa — also known as the Pacific Cartel, the Federation and the Golden Triangle.

It operates primarily out of the western Mexican states of Baja California, Sinaloa, Durango, Sonora and Chihuahua.

U.S. drug enforcement officials say the organization moves Colombian cocaine and Mexico marijuana into the U.S. and distributes it through gangs in Arizona, California, Texas, Chicago and New York City. It also operates labs to produce methamphetamines, and it ships heroin from Southeast Asian into the United States.

One of the cartel's leaders, Joaquin Guzman Loera, escaped from a maximum-security prison in 2001 and has not been recaptured. Known as "El Chapo," ("Shorty"), Guzman ranked 701st this year on Forbes magazine's list of the world's richest people. His fortune is estimated at around $1 billion. He is allied with Ismael Zambada Garcia, and U.S. drug enforcement officials consider the two to be Mexico's top drug kingpins.

Los Zetas — a paramilitary group that acts as enforcers for the Gulf Cartel, the organization of drug gangs that controls narcotrafficking on Mexico's east coast. Many of the Zetas are former Mexican soldiers who were trained to combat drug gangsters. Some of the gunmen are thought to have received training in the United States at the military School of the Americas.

The Zetas' leader is believed to be a former Mexican special forces soldier named Heriberto Lazcano, known as "El Lazca." He is wanted in the United States and Mexico for multiple murders and drug trafficking. A founding member, Jaime Gonzalez Duran, also known as "The Hummer," was arrested last year.

The Zetas were among the first criminal groups in Mexico to employ military tactics and heavy weapons, including 50 caliber machine guns, grenade launchers and even ground-to-air missiles.

In addition to fighting the Mexican government, the Zetas also fight with the Gulf and Tijuana cartels against the Sinaloa group.

La Familia Michoachana — a cartel formed in the west-central Mexican state of Michoachan, which has sometimes portrayed itself as a revolutionary or vigilante organization aimed at fighting against drugs.

In September 2006, masked gunmen threw five severed human heads onto the dance floor of a nightclub in the town of Uruapan. They left a message saying that the killings were the work of "the family."

Michoachan was a battlefield in the turf war between the Sinaloa and Gulf cartels, and the local gang is believed to have sided with the Sinaloa-led alliance known as the Federation.

The alleged leader of the Michoachan family was Alberto Espinoza Barron, known as "La Fresa" ("the Strawberry"). He was arrested late last year by the Mexican army. Mexican authorities say he was responsible for a grenade attack in the capital of Michoachan that killed eight people and wounded more than 100.