Accessibility links
Sen. Shelby Calls Immigration Bill 'Amnesty' Sen. Richard Shelby, a Republican from Alabama, says the current immigration bill amounts to "amnesty" for illegal immigrants and isn't what the country needs. Shelby says the system today is a sham and laws do need to be enforced or repealed.

Sen. Richard Shelby, a Republican from Alabama, says the current immigration bill amounts to "amnesty" for illegal immigrants and isn't what the country needs. Shelby says the system today is a sham and laws do need to be enforced or repealed.

And let's talk some more about those 12 million illegal immigrants who would become legal under the proposal. We've called Republican Senator Richard Shelby of Alabama who says he doesn't like that plan. And Senator, why not?

Senator RICHARD SHELBY (Republican, Alabama): Well, first of all, it's amnesty. It's saying if you've broken the law and you've come to the U.S. illegally, now we're going to let you stay. We went down this road 21 years ago, 1986 I believe it was. I was in the House then and voted against it. They said this would be the mother of all immigration bills. I knew what would happen and it laid the president for where we are today.

INSKEEP: Let me just ask though, Senator. Senator Ted Kennedy, when he talked about this proposal last week, said that there are some difficulties for people if they want to get permanent legal status. They do get this temporary visa. But he says if you want to go and get a green card, he says, quote, "you have to wait in line. You can't cut in line." Secondly, you'd have to apply not here in the United States but from your country to get that green card. You have to pass an English test. You have to have paid your fines. There are other fees who have to be paid and so forth. Why doesn't that count as enough accountability for you?

Sen. SHELBY: Well, it rewards those who broke the law. And besides, what's going to happen in 20 years…

INSKEEP: Wait a minute - you pay a fine.

Sen. SHELBY: Let me tell you this. Twenty years from now, we're going to have 20 million or 25 more million illegal aliens. We have ignored the law. We have not enforced our borders. Now we're going to reward these people. I think it's wrong.

INSKEEP: So you think that what Kennedy describes as some penalties and fines is just insufficient.

Sen. SHELBY: I think it's insufficient. And it's really a farce, in a way.

INSKEEP: Let me ask, though, there are 12 million people here now, here illegally, estimated. What would you do with them?

Sen. SHELBY: Well, first, what I would do is secure the border, if I had my druthers, and secure them well. Secondly, I would enforce the work rules with the employers. If there are no jobs, people would go home. They will not continue to go here. Now a lot of them won't go home, you'd have to round them up. But the problem is today, the immigration system is a sham, it's broken. The laws don't matter. If they don't matter, we either ought to repeal them or enforce them.

Sen. SHELBY: I think the economy would hurt, but we'd catch it up legally. And secondly, the rule of law should be paramount in this country. And it always has been, but in immigration it isn't today.

INSKEEP: So now, do you see opponents trying to block this bill from passing, or do you think it could actually change and be passed?

Sen. SHELBY: Well, that's a good question. There are going to be a lot of amendments on the floor. Could it be improved to where it's palatable to a lot of people that are against it today, including me? Sure. Will it be? I doubt it.

INSKEEP: And when you say could it be improved to be palatable to you, is it going to have to say no favors of any kind for 12 million illegal immigrants?

Sen. SHELBY: It's going to have to say no amnesty.

INSKEEP: Sen. Richard Shelby of Alabama, good talking with you this morning.

Sen. SHELBY: Thank you a lot.

INSKEEP: Thanks very much. 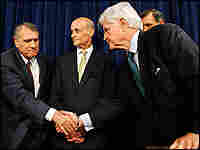 The proposed immigration overhaul announced last week by the White House and a bipartisan group of senators has something for everyone to love — or hate. The proposal, which offers legal status to most of the nation's 12 million illegal immigrants and also toughens border security, has drawn mixed reactions. Here, a look at the major interest groups and what they've said about the bill:

For the proposal. America's growers have long complained that a shortage of low-wage workers has meant that tons of fruits and vegetables have gone unpicked. Some 20 percent to 30 percent of California's peach harvest was lost last year because of a lack of pickers, according to the California Farm Bureau Federation. Farmers also saw losses on plums, nectarines and other crops, racking up losses estimated to be in the tens of millions of dollars. "We're looking at the failure of farms and small businesses," says Craig Regelbrugge, co-chairman of the Agriculture Coalition for Immigration Reform.

What growers like about the proposed immigration overhaul is that it includes a pilot program for legalizing agricultural workers. Farm hands who have worked in the U.S. for at least 150 days in the past two years would be able to legalize their immigration status. The number of workers would be capped at 1.5 million.

Divided support. Traditionally, unions have argued that illegal immigrants take away jobs from Americans and drive down wages for all workers in the country. Big unions, such as the AFL-CIO, support the amnesty provision in the bill but are adamantly opposed to guest-worker programs, which they claim create a "disenfranchised underclass of workers." So they'll be fighting against the compromise proposal. But the labor movement is divided. Two influential unions — the Service Employees International Union and Unite Here, which represents hotel and garment industry workers — count many immigrants among their members, and they're likely to support elements in the proposed overhaul.

Divided support. The country's major employers helped shape the compromise legislation, but they're not happy with the result. They worry that it won't solve the coming shortage of workers, especially low-skilled ones. The new point system, they say, would favor more highly skilled workers. Yet the Labor Department estimates that 37 percent of all new jobs in the next decade will be filled by people with a high school education or less. Of the 10 occupations expected to see the largest job growth, only two require a college degree. Employers also complain that the proposed legislation requires them to check an electronic database to determine a worker's immigration status. Susan R. Meisinger, president of the Society for Human Resource Management, which represents 215,000 executives, called the proposed system "unworkable."

On the other hand, technology companies such as Intel, Motorola and Hewlett-Packard have been pushing to boost the number of high-skill workers allowed to enter the U.S. The proposal would do just that, increasing the annual cap for temporary work visas, known as H-1Bs, from 65,000 to 115,000. High-tech firms would also like to see those workers get their green cards sooner. Currently, that process can take as long as five years — and it's not clear whether the new proposal would speed up that process. "What we are very concerned about is creating a new backlog on top of an existing one," says Robert Hoffman, spokesman for Oracle, in an interview with BusinessWeek magazine.

Divided support. The Mexican government has spent years lobbying the U.S. for a comprehensive immigration plan that would allow more people to work legally in the United States. A spokesman cautiously welcomes the new proposal, calling it an "opportunity." But others in Mexico expressed concern that it doesn't let enough Mexicans enter the United States legally to work, and makes it difficult for those who have entered illegally to change their status.

For the proposal, with reservations. The Catholic Church has no immediate stake in the immigration debate, but it has advocated for a "just and comprehensive" immigration overhaul. At least one church, in Chicago, has granted sanctuary to an illegal immigrant facing deportation, and other churches across the country say they plan to do the same.

The church called the proposed program a "step in the right direction" but expressed "significant reservations." Church officials are particularly concerned that it will place severe restrictions on the number of family members immigrants can sponsor for visas. "We are very concerned about provisions that could lead to separating families and disrupting family life," said Bishop Gerald R. Barnes of the U.S. Conference of Catholic Bishops.

Divided support. The self-described guardians of the U.S.-Mexico border have long called for beefing up patrols of the border, and the new proposal does just that. It calls for 18,000 new Border Patrol agents, 370 miles of fencing and other measures designed to keep illegal immigrants from entering the country. But the Minutemen are worried about provisions that would eventually grant citizenship to millions of illegal workers. "It is repulsive and insulting that our government would promote any form of amnesty for overtly illegal conduct," said the group's executive director, Al Garza.