Accessibility links
The Bankers Who Warned About 'Too Big To Fail' In their 2004 book, Gary Stern and Ron Feldman, top executives at the Federal Reserve Bank of Minneapolis, cautioned the world about systemic financial risk and the need for more oversight. They admit to a fleeting sense of "I told you so."

With offices, assets and contracts around the world, AIG posed a threat to the global financial system. Dan Kitwood/Getty Images hide caption 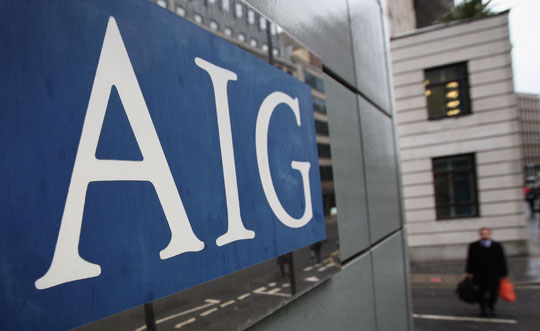 With offices, assets and contracts around the world, AIG posed a threat to the global financial system.

Opening Chapter of 'Too Big To Fail'

Gary Stern and Ron Feldman, colleagues at the Federal Reserve Bank of Minneapolis, say they've worried for years about banks growing "too big to fail."

That has become a common theme of this economic crisis, as the government speeds to the rescue of major banks and insurers like AIG. It's also the basis of a book that Stern, the Minneapolis Fed president, co-wrote with Feldman, a senior vice president. Titled Too Big to Fail: The Hazards of Bank Bailouts, it sounds like something rushed into print amid the economic crisis. But, no, it first appeared in 2004.

Feldman says they couldn't help noticing that much of what they predicted has come to pass, as the government has stepped in and bailed out institutions seen as too big to fail: AIG, Fannie Mae and Freddie Mac, as well as major banks.

"Certainly, 'I told you so' did run through my mind," Feldman admits.

Early Signs Of The 'Too Big' Threat

The two got a firsthand look at the "too big to fail" phenomenon in 2001, when a broker-dealer firm in Minneapolis got into trouble. The firm's counsel made an interesting argument: If it was allowed to go under, the lawyer said, it could disrupt economic activity in the Midwest. That turned out not to be true, but Stern and Feldman say the idea that government might be expected to step in is dangerous, because it encourages people to take risks they shouldn't.

Their book, which has just been reissued in paperback, proposed a series of changes that are now being considered at the highest levels of government. Leaders in Washington have talked about establishing a "systemic risk regulator" — an idea Stern and Feldman wrote about five years ago.

"Right now, we don't have an entity — an oversight entity, a government entity — that thinks to itself, 'What happens if this institution gets into trouble and is going to fail. What would we do about it at that time?' " Feldman says. "The primary focus of most supervision is to prevent them from getting into trouble. And I think it sounds like a generic thing — 'Well, you change your focus.' That's not trivial. That's important. Because it's by focusing on what we would do if they got in trouble that this stuff gets revealed."

If large institutions fail, they argue, the system needs something akin to the procedures nuclear reactors have when they get into trouble — some way to safely shut the institution down. That would make it clear that the government won't be coming to the rescue, which in turn should discourage risky behavior.

Stern and Feldman were in Washington, D.C., recently on what amounts to a book tour: a talk at the Brookings Institution. Much of the discussion centered on next steps in solving the financial crisis, but some in the audience wanted to know why the authors' warnings in Too Big To Fail hadn't been given more attention.

Among the luminaries in attendance was former Federal Reserve Chairman Alan Greenspan. He says he considered the quandary of "too big to fail" when he was in office, and he has thought about it more lately, too.

"Fannie and Freddie were not too big to fail," he says. "How do I know? That's what the law said. On the debentures, when they used to be physical paper, it literally said, 'These instruments are not protected by the full faith and credit of the United States government.' "

"Indeed, I always took the position when I ended up [testifying on Capitol] Hill that Fannie and Freddie were not too big to fail," Greenspan remembers. "Needless to say, my fingers were crossed behind my back. But you cannot have that position and still argue that the federal government has credibility."

Excerpt: 'Too Big To Fail'

The following is taken from the opening chapter of Too Big To Fail: The Hazards of Bank Bailouts, by Gary Stern and Ron Feldman, published in 2004 and 2009 by the Brookings Institution. Reprinted with permission.

Despite some progress, our central warning is that not enough has been done to reduce creditors' expectations of TBTF protection. Many of the existing pledges and policies meant to convince creditors that they will bear market losses when large banks fail are not credible and therefore are ineffective. Blanket pledges not to bail out creditors are not credible because they do not address the factors that motivate policymakers to protect uninsured bank creditors in the first place. The primary reason why policymakers bail out creditors of large banks is to reduce the chance that the failure of a large bank in which creditors take large losses will lead other banks to fail or capital markets to cease working efficiently.

Other factors may also motivate governments to protect uninsured creditors at large banks. Policymakers may provide protection because doing so benefits them personally, by advancing their career, for example. Incompetent central planning may also drive some bailouts. Although these factors receive some of our attention and are addressed by some of our reforms, we think they are less important than the motivation to dampen the effect of a large bank failure on financial stability.

Despite the lack of definitive evidence on the moral hazard costs and benefits of increased stability generated by TBTF protection, the empirical and anecdotal data, analysis, and our general impression-imperfect as they are-suggest that TBTF protection imposes net costs. We also argue that the TBTF problem has grown in severity. Reasons for this increase include growth in the size of the largest banks, greater concentration of banking system assets in large banks, the greater complexity of bank operations, and, finally, several trends in policy, including a spate of recent bailouts.

Our views are held by some, but other respected analysts come to different conclusions. Some observers believe that the net costs of TBTF protection have been overstated, while others note that some large financial firms have failed without their uninsured creditors being protected from losses. However, even analysts who weigh the costs and benefits differently than we do have reason to support many of our reforms. Some of our recommendations, for example, make policymakers less likely to provide TBTF protection and address moral hazard precisely by reducing the threat of instability. Moreover, our review of cases where bailouts were not forthcoming suggests that policymakers are, in fact, motivated by the factors we cite and that our reforms would push policy in the right direction.

A second camp believes that TBTF protection could impose net costs in theory, but in practice legal regimes in the United States-which other developed countries could adopt-make delivery of TBTF protection so difficult as to virtually eliminate the TBTF problem.

We are sympathetic to the general and as yet untested approach taken by U.S. policymakers and recognize that it may have made a dent in TBTF expectations. n the long run, however, we predict that the system will not significantly reduce the probability that creditors of TBTF banks will receive bailouts. The U.S. approach to too big to fail continues to lack credibility.

Finally, a third camp also recognizes that TBTF protection could impose net costs but believes that there is no realistic solution. This camp argues that policymakers cannot credibly commit to imposing losses on the creditors of TBTF banks. The best governments can do ,in their view, is accept the net costs of TBTF, albeit with perhaps more resources devoted to super-vision and regulation and with greater ambiguity about precisely which institutions and which creditors could receive ex post TBTF support.

Like the third camp, we believe that policymakers face significant challenges in credibly putting creditors of important banks at risk of loss. A TBTF policy based on assertions of "no bailouts ever" will certainly be breached. Moreover, we doubt that any single policy change will dramatically reduce expected protection. But fundamentally we part company with this third camp. Policymakers can enact a series of reforms that reduce expectations of bailouts for many creditors at many institutions. Just as policy-makers in many countries established expectations of low inflation when few thought it was possible, so too can they put creditors who now expect protection at greater risk of loss.

To many practical people the suggestion that a large bank be allowed to fail may seem to represent dogmatic adherence to standard economic doctrine, a victory of ideology over pragmatic common sense. A pragmatic position is to argue that, yes, business failures do serve a useful function, but in the specific case of a large bank, the costs of allowing failure outweigh the costs of supporting it. After all, the social costs of failure are immediate, while the advantages of permitting failure are indirect and removed into the future. But this pragmatic position should be rejected because it ignores externalities overtime. If we prop up a large bank because the direct costs of doing so outweigh the cost of allowing it to fail, then the next time a large bank is in danger of failing it is likely to be propped up too. But in the future the same benefit will then probably be accorded to medium-sized banks. And from there it is likely to spread to small banks, to other financial institutions, and ultimately to other firms. When one includes the cost of moving down this slippery slope in the cost of saving a large bank, then the costs of allowing it to fail may seem small by comparison. At a time when devotion to pragmatism is so much in the air, it is useful to consider also the benefits of sticking to one's principles even in hard cases.

Examining If Banks Are Too Big To Fail March 9, 2009
Burden Of Saving AIG May Provide Future Lessons March 3, 2009