Accessibility links
Obama Promises To Slow U.S. Arms Flow To Mexico President Obama is promising new help for Mexico in its battle with drug traffickers. The President met one-on-one Thursday with his Mexican counterpart, Felipe Calderon. Their meeting marked the beginning of a four-day Latin American tour, in which Obama is hoping to show that the U.S. is once again paying attention to the region.

President Obama is promising new help for Mexico in its battle with drug traffickers. The President met one-on-one Thursday with his Mexican counterpart, Felipe Calderon. Their meeting marked the beginning of a four-day Latin American tour, in which Obama is hoping to show that the U.S. is once again paying attention to the region.

President Obama put out a statement on the memos, referring to a dark and painful chapter in our history.

He did not draw in the past for long. The president flew to Mexico where he is promising help in a battle with drug traffickers, and he met with his Mexican counterpart Felipe Calderon. It was the start of a trip in which Mr. Obama seeks a fresh start in Latin America. NPR's Scott Horsley reports.

SCOTT HORSLEY: During an outdoor dinner at Mexico City's anthropological museum, Presidents Barack Obama and Felipe Calderon both raised glasses of Mexican wine and toasted each other. Surrounded by relics of past civilization, the two men promised to begin a new era in U.S.-Mexican relations one built on what Mr. Obama called a firm foundation of mutual respect and interest. The two men talked earlier about some of those interests, including trade, immigration and the economic meltdown that has put the brakes on what had been period of rapid growth in Latin America.

But the issue Mr. Obama said demands the most urgent action is Mexico's deadly battle against drug cartels.

President BARACK OBAMA: I will not pretend that this is Mexico's responsibility alone, that a demand for these drugs in the United States is what is helping to keep these cartels in business. This war is being waged with guns purchased not here but in the United States. More than 90 percent of the guns recovered in Mexico come from the United States, many from gun shops that line our shared border. So, we have responsibilities as well.

HORSLEY: The Obama administration has promised to speed up delivery of some long-promised assistance to Mexico, including a few military helicopters to help track down drug traffickers. Yesterday, Mr. Obama said he would ask Congress to ratify a 12-year-old treaty that's aimed at combating gun smugglers.

A reporter asked about reinstating the U.S. ban on assault weapons. Mr. Obama endorsed that idea during the campaign but he's reluctant to expend much political capital fighting for it now.

Pres. OBAMA: None of us are under any illusion that reinstating that ban would be easy. And so what we focused on is how we can improve our enforcement of existing laws - because even under current law, trafficking illegal firearms, sending them across the border, is illegal.

HORSLEY: President Calderon said the flow of assault weapons from the U.S. to Mexico is one of many thorny topics that came up during what he called an open, frank and trusting conversation. Mexico would clearly like the U.S. to do more to keep guns out of the hands of drug traffickers. But speaking through an interpreter, Calderon did not press too hard.

President FELIPE CALDERON (Mexico): (Through translator) We know that it is a political delicate topic because Americans truly appreciate their constitutional rights, and particularly those that are part of the Second Amendment.

HORSLEY: The Mexican president was a little more critical on the question of Cuba. Earlier this week, the Obama administration lifted restrictions on Cuban-Americans, making it easier to visit relatives on the island and to send more money home. But it made no move to end the 47-year-old trade embargo. Calderon wondered aloud if it isn't time for the U.S. to go further.

Pres. CALDERON: (Through translator) The question that has to be posed is whether the U.S. embargo on Cuba has worked. The reality is that the embargo has been there long before we were even born and yet things have not changed all that much in Cuba.

HORSLEY: Mr. Obama said the steps the administration took this week were a show of good faith, adding that the ball is now in Cuba's court.

Pres. OBAMA: A relationship that effectively has been frozen for 50 years is not going to thaw overnight. And so having taken the first step, I think it's very much in our interest to see whether Cuba is also ready to change.

HORSLEY: Cuban President Raul Castro said last night, Cuba is willing to discuss human rights, political prisoners and anything else with the U.S., so long as the talks are on equal terms. Mr. Obama is likely to hear more about Cuba over the weekend. From Mexico, he heads to the Caribbean island of Trinidad and a summit meeting with 33 other leaders from throughout the Western hemisphere.

Jason Beaubien Reports On Mexican Reaction To The Visit 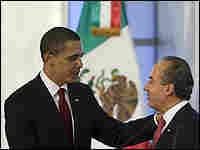 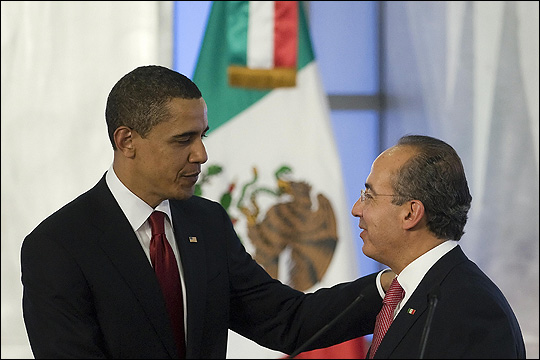 But he signaled that he will not seek the reinstatement of a U.S. assault weapons ban. Mexican President Felipe Calderon hoped to persuade Obama to follow up on a campaign pledge to push for a revival of the ban.

Instead, Obama used a news conference to highlight an inter-American weapons treaty intended to stem the flow of arms and ammunition to drug cartels.

Obama met in Mexico City with Calderon, who has been conducting an aggressive fight against drug cartels.

"At a time when the Mexican government has so courageously taken on the drug cartels that have plagued both sides of the borders, it is absolutely critical that the United States joins as a full partner in dealing with this issue," Obama said.

Backing Away From A Campaign Pledge

But the assault-weapons ban apparently won't be part of that commitment. Obama seems to have bowed to the reality that such a move would be unpopular in politically key U.S. states and among Republicans, as well as some conservative Democrats.

The two leaders also discussed the economy and energy during Obama's one-day visit. He travels Friday to Trinidad and Tobago for the Summit of the Americas.

His visit comes at a time when drug-related violence along the border is on the rise.

Allies in the fight against drug cartels, Obama and Calderon took different stands on U.S. sanctions against Cuba. Calderon said the 47-year-old U.S. trade embargo has not been successful in forcing Cuba to adopt democratic reforms.

"We do not believe that the embargo or the isolation of Cuba is a good measure for things to change," the Mexican president said.

Obama pointed to the announcement this week that the U.S. was softening sanctions, allowing Americans to make unlimited transfers of money and visits to relatives in Cuba. But he said Cuba needs to reciprocate with actions that are "grounded in respect for human rights."

"We have a responsibility as well; we have to do our part," Obama said. He said the U.S. must crack down on drug use and the flow of weapons into Mexico.

Obama also said the United States and Mexico must work together to stem the problem of illegal immigration. At the same time, he said: "My country has been greatly enriched by immigrants from Mexico."

The two leaders also pledged to cooperate on combating global warming and the global recession.

From NPR and Associated Press reports.