Accessibility links
Terrence Howard: 'I Would Be a Witness' Actor Terrence Howard introduces viewers to the film Knocking." It's a look inside the Jehovah's Witness religion. He talks candidly about the film and his personal connection to the faith.

Listen
Terrence Howard: 'I Would Be a Witness' 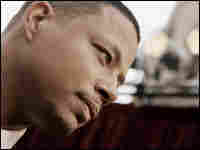 As host of the PBS documentary series Independent Lens, actor Terrence Howard introduces viewers to the film Knocking. It's a look inside the Jehovah's Witness religion. He talks candidly to NPR about the film and his personal connection to the faith.

Howard prides himself on choosing roles that speak to him. It is an ethic he has held close to him throughout his career in Hollywood, demonstrated through his performances in films such as Mr. Holland's Opus, Crash, Lackawanna Blues and, most recently, Pride. His Academy Award nomination for Hustle & Flow helped him become a household name. With all that glitz, his rise to fame is more familiar than his spiritual journey to most people.

Howard on being exposed to the Jehovah's Witness religion as a child:

"I came across [Jehovah's Witnesses] and, like most people, I was told that when we heard the Witnesses or saw them walking up the street, you would immediately shut the curtains and act like nobody was home, and I always wondered about that."

Howard later embarked on his own exploration of the faith. As a young adult, he began to embrace the principles of the religion.

Now, 17 years later and with a Hollywood career that continues to ascend, he's very open about one ongoing personal conflict: his faith.

"I'm like most people in the world. I'm a little selfish in what I want. I like doing my thing, my way," the actor says. "In my heart, I wanted to be a Witness. If it wasn't for the smoking of cigarrettes and all ... I would be a Witness."

The actor has yet to trade his spiritual aspirations for his professional ones. But he plans to pursue his desire to become an active Jehovah's Witness.

"Sometimes it takes awhile to be able to qualify. You have to qualify to run in the race. I'm exercising," he says.

Knocking is produced by Joel P. Engardio and Tom Shepard.