Accessibility links
Los Angeles, Salvadoran Police Unite Against Gangs Los Angeles and San Salvador have a problem in common: gangs. The Salvadoran National Police estimate there are now more than 12,000 deported and homegrown gang members in the country, responsible for 40 percent of all homicides. Police in both places recently agreed to begin swapping tactics and intelligence to combat the problem. 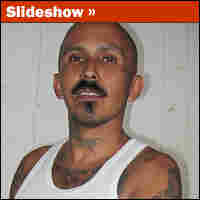 This report was produced by Mandalit del Barco with help from Ruxandra Guidi and Sarah Bush, part of a series co-produced by Gracias Vida Productions, Youth Radio and the National Geographic Society.

In the middle of San Salvador, in an impoverished concrete apartment complex surrounded by barbed wire, is a barrio called Paraiso, or Paradise. On every wall are spraypainted graffiti tags of the Mara Salvatrucha (or M.S.), written in English. One reads, "In memory of my homeboy, Snoop." Another warns, "Welcome to the barrio of the death: M.S. 13."

Josue Ramirez is 29 years old and a member of the Mara Salvatrucha. He says homeboys from Los Angeles' Pico Union area introduced the gang lifestyle to El Salvador beginning in the 1990s. Now the M.S. and their rivals, the 18th Street gang, are L.A.'s most notorious exports.

"The country is tired of the gangs," sighs Marta Arevalo, who lives in one of the capital city's nicer neighborhoods.

The Salvadoran National Police estimate there are now more than 12,000 deported and homegrown gang members in the country, responsible for 40 percent of all homicides. To fight them, police have used what President Tony Saca calls the "Mano Dura," the strong-hand approach, and the "Super Mano Dura."

From a rickety pickup truck, police inspector Eliseo Leiba surveys a neighborhood called Iberia. School-age children run through the streets, whistling as the police approach. Leiba says the kids are known as antennas, or spies. He walks us to a nearby open field where he says gangbangers regularly dump their victims. Last year, police found 10 bodies buried here.

Leiba runs down the latest crime trends. "The gangs have modernized," he says. "Instead of going out in public, they use cell phones to extort store owners. People are too scared to report the death threats to the police."

Leiba is the man in charge of the "Super Mano Dura," which has military soldiers patrolling the streets with the national police. Leiba denies that his officers are abusive, but says they are at war with the gangs. "Thanks to the Plan Super Mano Dura, we've identified and photographed all the known gang members into a national data bank," he explains. "We know where they live, and who their parents are. We can use this information for our investigations."

Leiba says he welcomes any new investigative tools or tactics the Los Angeles Police Department can share. But he adds that what would help most is if the U.S. would stop deporting so many of its criminals to El Salvador. Under the Mano Dura, gang members have been swept into prisons such as Cuidad Barrios, a two-and-a-half hour drive from the capital.

The prison is overcrowded with members of the M.S., their faces, arms and bellies covered with tattoos. They play soccer on a concrete courtyard painted with a logo of the L.A. Lakers. Most of them have playful nicknames, like "Dracula" — Vladimir Antonio Arevalo Chavez. The 32-year-old is in prison on drug charges. He says the national police are out to eradicate and even exterminate his homeboys.

The new international dragnet is equally worrisome for ex-Angelenos such as "Snoopy" — Armando Martinez, who was deported to El Salvador after serving time in prison in the U.S. An assault conviction in San Salvador landed him here. Asked what the Salvadoran police can learn from L.A. and vice versa, he says, "From each other, they're not gonna learn nothing good. Because they're both dirty."

Martinez, who is 38, says he remembers the crooked cops he encountered at Los Angeles' Rampart division, who scandalized the departments by framing gang members. "The same thing is happening in El Salvador," Martinez says. "If they go to my house and don't find nothing but want to take me to jail, they put a hand grenade, drugs, saying, yeah, they found that at my house."

Back in Paraiso, Josue Ramirez cautions that new generations are coming up. And he says the Super Mano Dura has driven the gangs to come up with new tactics. "We have to study the police, like they study us," he says. "We're adapting to survive. No more tattoos. We have to hide. We don't want to lose any more homeboys. We have to keep defending the Mara.

Ramirez says he doubts that police in El Salvador or Los Angeles can do anything to eliminate the gangs. He declares, "M.S. por vida," or M.S. for life.