Accessibility links
Take That! High-Tech Ways To Fight Off Pirates Most merchant ships aren't allowed to carry cannons — unless they're water cannons. These high-tech super squirters are part of a growing market in pirate repellants, ranging from slippery foam that coats ship decks and stairs to beams of piercing sound.

The owners of ships that ply the dangerous waters near Somalia are looking at options including slippery foam, lasers, electric fences, water cannons and high-intensity sound.

As this researcher demonstrates, once a surface — like a ship's deck or stairs — is coated with the slippery foam, it's impossibly to walk or climb even with the aid of a harness. 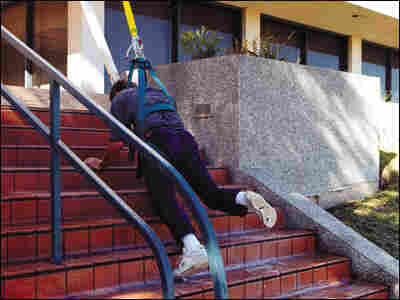 Ship owners will try just about anything except guns.

That's because most shipping companies still don't want guns on board their vessels, for a variety of reasons. Crews aren't trained to use them, and they can be dangerous if a ship is carrying cargo that burns, like oil or gas. Also, many ports refuse entry to armed ships.

So civilian mariners have been exploring other approaches. They've already shown that a blast from an ordinary fire hose can discourage an unwelcome visitor.

And now there's something much more powerful.

The Force 80 is no ordinary squirt gun, he says. It has a 3-inch nozzle that can send1,400 gallons a minute 100 yards in any direction. 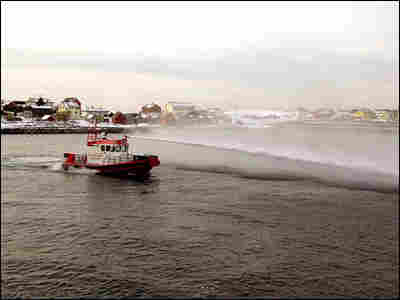 "It is a tremendous force of water that will knock over anything in its path and will also flood a pirate's ship very quickly," James says.

And since the Force 80 can be controlled from inside the ship, using video cameras and a joystick, pirates can't easily shoot the person operating it.

James says Unifire is working with Raytheon to integrate the water cannon with a system that uses the ship's radar to detect small vessels before they get too close.

Another anti-pirate device is the Mobility Denial System, a slippery nontoxic foam that can be sprayed on just about any surface. 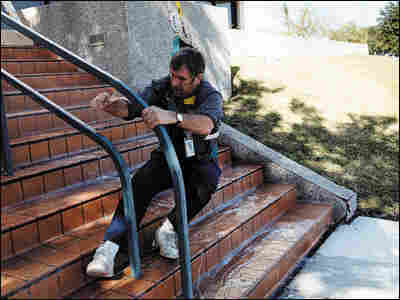 Ron Mathis, senior program manager of Southwest Research Institute in San Antonio, Texas, says the foam was developed for the Marine Corps to control unruly crowds. But, he says, he's optimistic about selling some for "the pirate application."

The idea would be to spray the pirate's vessel as it approached, or to coat ropes, ladders, steps and the hull of the ship that's under attack.

Mathis says walking on a surface that has been sprayed is like walking on ice. Climbing steps becomes nearly impossible. And ladders are out of the question. 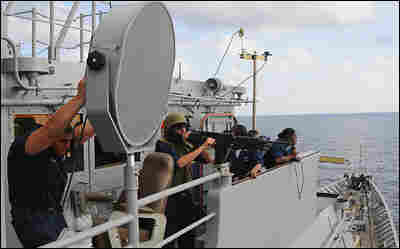 It's a high-powered directional loudspeaker that allows a ship to hail an approaching vessel more than a mile away. And it comes with recordings of useful phrases, like "You must leave the area immediately," in Somali and dozens of other languages.

That keeps harmless fisherman from getting into trouble and gives pirates pause," says Robert Putnam, who handles media relations at American Technology Corp. in San Diego, which developed the LRAD.

"Knowing that they've lost the element of surprise is half the battle," Putnam says. "Most pirate incidents would never occur once they know at that distance that they've been discovered."

For pirates who keep coming anyway, the LRAD has another feature. It's a piercing "deterrent tone" that sounds a bit like a smoke detector alarm.

The tone can be transmitted with enough intensity to cause extreme pain and even permanent hearing loss for anyone directly in the beam of sound that comes from the device.

Putnam says a Japanese destroyer used the hailing function of an LRAD to turn away pirates who were attacking a tanker from Singapore.

But Capt. John Konrad, who blogs for the Web site Gcaptain.com, says no anti-pirate device is perfect.

Konrad, who is in Korea while his next ship is being built, says nothing works unless you know a pirate is on the way. And that can be tricky.

"How do you determine who is a pirate and when the pirate is coming through," he says. After all, pirate ships often look like fishing vessels until the ladders and guns and grenade launchers come out.

So Konrad is a big fan of having ships travel in convoys. That means there are more eyes looking for trouble and that pirates will have a harder time attacking any single ship.

Konrad also likes the idea of unmanned aerial vehicles, or UAVS. They can be launched from the deck of a ship, fly high overhead and spot suspicious vessels while they're still a long way off.

"The best case scenario is that you find these vessels early enough that you can get a Navy ship detached to your location and let them handle the situation," Konrad says.

We described the LRAD — the Long Range Acoustic Device — as "a deterrent tone, loud and focused enough to cause severe pain and even deafness if you're directly in its path." In fact, a person would suffer permanent hearing loss only if exposed to the sound for minutes or even just seconds, depending on how loud and far away it was.