Accessibility links
Cuba Seizes Spotlight At Summit Of Americas President Obama headed to Trinidad and Tobago Friday for the fifth Summit of the Americas, but much of the focus was on a nation that wasn't there, as the administration and Cuban officials hinted at warmer relations. 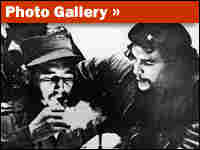 President Obama arrived in Trinidad and Tobago on Friday for the fifth Summit of the Americas, where the leaders of 34 Western Hemisphere nations were gearing up to shine an international spotlight on U.S.-Cuba relations.

Summit leaders had planned to spend three days brainstorming about ways to end the global recession, energy security and environmental sustainability, but attention turned to Cuba this week after Obama signaled a thaw in a half-century of frosty U.S.-Cuba relations.

As leaders arrived in Port-of-Spain, Trinidad, Jose Miguel Insulza, head of the Organization of American States, said he would ask OAS members to reinstate Cuba's membership at a meeting in May. The island's membership was suspended in 1962 in a decision that coincided with the U.S. trade embargo.

In remarks kicking off the weekend gathering of nations — of which Cuba was the only country in the region not represented — Obama repeated the kind of remarks toward the Castro regime that marked his campaign for the presidency.

"The United States seeks a new beginning with Cuba," he said at the Summit of the Americas opening ceremony, according to his remarks released in advance by the White House. "I know there is a longer journey that must be traveled in overcoming decades of mistrust, but there are critical steps we can take toward a new day."

President Cristina Fernandez of Argentina, in her remarks to the summit's inaugural session, won applause when she called on the United States to lift the "anachronism that the embargo means today," a reference to the nearly half-century-old U.S. ban on trade with Cuba.

"Let's not miss the chance," she said, to build a new relationship with Cuba.

Obama began the dialogue about Cuba on Tuesday when he lifted restrictions on travel and money transfers to Cuba for Cuban-Americans who have family on the island. He followed that with an editorial pitch to Latin Americans that ran in newspapers throughout the region on Thursday, saying he wanted to forge partnerships in Latin America that aren't based on right-versus-left ideologies.

Obama went on to use U.S. policy toward Cuba as an example of an ideological debate that failed to advance democracy or create opportunities for the Cuban people. He said he foresees a further thawing of relations if the Cuban government shows a willingness to permit citizens to travel and worship and to free political prisoners.

On Thursday, Cuban leader Raul Castro agreed to open a dialogue with the United States on all those issues.

"We have sent word to the U.S. government in private and in public that we are willing to discuss everything — human rights, freedom of the press, political prisoners, everything," Castro said. The Cuban government had previously maintained that those were domestic issues that did not involve the White House.

During a visit Friday to the Dominican Republic, Secretary of State Hillary Clinton said she was pleased that Castro is willing to talk.

"We welcome his comments, the overture that they represent, and we are taking a very serious look at how we intend to respond," she said.

Cuba is not invited to the summit, but other Latin American nations are expected to push Obama to lift a U.S. trade embargo that has been in place for 47 years.

"Mexico acknowledges that this is a very constructive, positive step for the hemispheric relations, particularly for the region," Calderon said after visiting with Obama in Mexico City on Thursday.

Meanwhile, in activities leading up to the summit, Luis Alberto Moreno, president of the Inter-American Development Bank, encouraged member nations to invest in infrastructure improvements as a way to jump-start their economies.

Moreno said the economies of Latin America and the Caribbean could see growth of up to 5 percent if they improved infrastructure, according to the summit's Web site.

Obama has pushed infrastructure improvements as a way to stimulate the U.S. economy, making them a focus of his $787 billion economic stimulus package.

The president said in his editorial that summit leaders must examine the capacity of the IDB as they seek to spur economic activity.

One of the stated goals of the three-day summit is to promote prosperity.

With additional reporting from wire services