Accessibility links
Novelist Obejas Captures Cuba In 'Ruins' Havana-born writer Achy Obejas returns to her native city with a novel called Ruins. It's a bittersweet portrait of Cuban life in the mid-1990s.

Havana-born writer Achy Obejas returns to her native city with a novel called Ruins. It's a bittersweet portrait of Cuban life in the mid-1990s.

Writer Achy Obejas was born in Havana. And her new novel, "Ruins," takes readers to her native city where she creates a portrait of Cuban life in the mid 1990s. Alan Cheuse has this review.

ALAN CHEUSE: Obejas' main character is a middle-aged man named Usnavy. His mother, with all the best hopes for her son, having taken his name from the side of an American ship she saw berthed at Guantanamo - U.S. Navy. This becomes quite ironic since many of Usnavy's best friends from his Havana neighborhood have either already departed by sea for Florida or are making plans to sail away from what they consider to be their island prison.

He meanwhile, as Obejas describes him - a man thin and gaunt, his previously reddish hair turned white as sea foam and topping his now sun-blotched face seems to be the only supporter of the revolution in his crowd.

Everyone's hovering at the edge of malnutrition. The big item on the dinner menu is Russian woolen blankets. Blankets soaked in a popular sauce and cut up for sandwiches. Usnavy is a dreamer with a wife and daughter and one prized possession - a majestic multicolored Tiffany lamp, an inheritance from his mother. Most of the novel's action, such as it is, centers on his attempt to keep the base of the lamp while selling bits and pieces of it in order to buy food and to replace a bike some thieves have run off with.

I say the action such as it is because the book is more of a character study of a man in his milieu than a fast action anything. As Obejas points out, most Cubans love to stroll, to saunter about as if an actual destination were a second thought. The novel moves along at a similar pace. A stroll through Achy Obejas's Havana in 1994 is a bittersweet excursion.

SIEGEL: The new novel is "Ruins" by Achy Obejas. Our reviewer is Alan Cheuse. 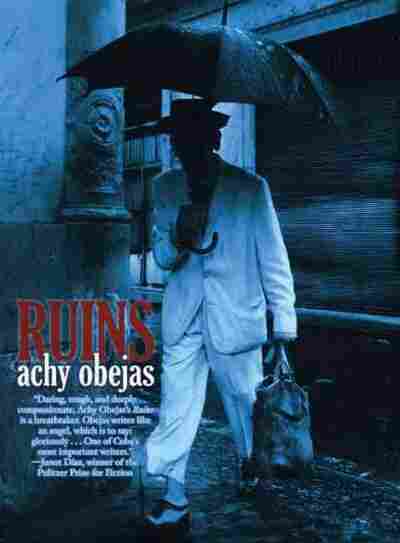