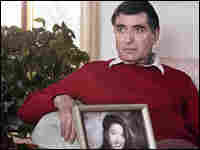 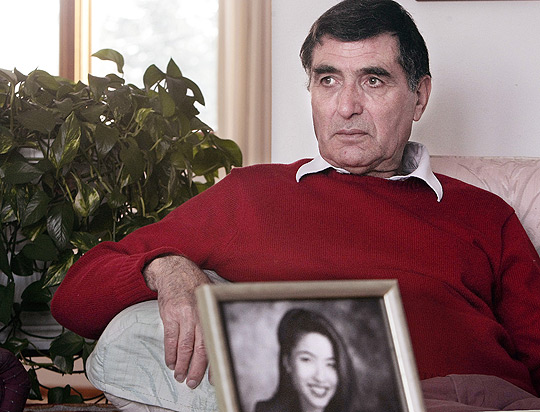 Reza Saberi, the father of American-Iranian journalist Roxana Saberi, pictured in foreground, in his Fargo, N.D., home, on Feb. 28.

Iran's Revolutionary Court sentenced Iranian-American journalist Roxana Saberi to eight years in prison for espionage on Saturday. The 31-year-old journalist, who has reported for NPR, the BBC and other news organizations, has been jailed at Evin Prison in Iran since Jan. 31.

Saberi's father, Reza Saberi, who was in Iran but not allowed into the courtroom, tells host Scott Simon that his daughter was coerced into making incriminating statements.

"They told her if she made the statements they would free her," he says. "It was a trick."

Simon notes that because Reza Saberi is speaking from Iran, authorities may be listening to the conversation.

He says Roxana wants to go on a hunger strike "to draw the attention of the Iranian authorities who have sentenced her without justifiable cause." He notes, however, that she is weak and "if she does [go on a hunger strike], it can be very dangerous to her health."

This morning the father of jailed American journalist Roxana Saberi reports that Iran's Revolutionary Court has sentenced his daughter to eight years in prison for espionage. Ms. Saberi's lawyer was not allowed to ask the court about bail. Roxana Saberi has reported from Iran for NPR, the BBC and other news organizations. She's been jailed at Evin prison in Iran since Jan. 31. We're joined now from Tehran from Roxana's Saberi's father, Reza Saberi. Mr. Saberi thanks so much for making the time to be with us.

Can you tell us what happened in the court room?

Well this morning, the verdict was issued on Wednesday, but since Thursday and Friday are the weekend here, all day, so we had to go today to the court. The lawyers went there and they brought our daughter to the court with two persons from the intelligence office. I asked to go in, the lawyer asked to see if I could also be present. They did not allow me to go in. So after this, the verdict was announced to them, the lawyer told me what happened, yes. They are sentencing her to 8 years imprisonment on charge of espionage, yes.

Charge of espionage. Do you know anything about the substance of the charges, Mr. Saberi? And I want to say to our audience, we want to be very careful in speaking with you, because of course you're in Tehran, and people listen, and for that matter, they listen to what you say on our air here.

They are listening, I know.

That being noted, do you know anything about the substance of this case?

Substance is that in the beginning they have, under pressure, she had made some statements. And later, when they questioned again, she denied, said that those things that she had said were not right. And again, when there was a court hearing, Roxana again denied what was on there. And it was written in the statement – she signed that all those things that she had said before, they were not right. But they apparently, in the case, they didn't consider, they did not consider what she had, her denial, yes.

This is a difficult question to ask, Mr. Saberi, for all the obvious reasons, but do you have reason to think she was coerced into making statements at any point.

Yes I have, I have reason, and she has herself said that, yes. Not only coerced, but also deceived. She was deceived, they told her that, if she said like this, they would free her and then they didn't free her. Later she found out that it was a trick, yes.

And her lawyer was not allowed to ask for bail. Was he permitted to say anything in her defense?

Her lawyer said that her objection should be turned down, and signed. And that is all he could say. There was not really like defense like in other courts. They wanted just to speak their own words.

Have Iranian officials made any of the evidence public?

I don't think they have any evidence, and I haven't heard any evidence that can be made public.

Forgive me for not knowing, Mr. Saberi, do you have any legal options, can you appeal this case?

Yes, yes we can appeal, and we are going to appeal for this case.

Do you know how your daughter is doing, have you been able to see her?

She is very weak and frail, last time we saw. And she wanted to go on hunger strike, but we persuaded her not to do so. And after this, most probably she will, even though, when we visit her, we want to ask her not to do so. But she is quite depressed about this mater, and she wants to go on hunger strike. And if she does, she's so frail, it can be very dangerous to her health.