Accessibility links
Who Put The Navel In Navel Oranges? When you pull apart a nice, juicy navel orange, why do you find those cute little sections hiding in the center? 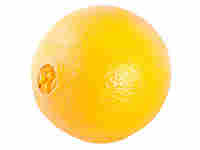 Looks like a bellybutton, but it's actually a second orange. iStockphoto.com hide caption

When you pull apart a nice, juicy navel orange, why do you find those cute little sections hiding in the center?

Orange historian Vince Moses knows the answer. He lives in Riverside, Calif. — the navel orange's Shangri-La — and in his time, he has done plenty of navel gazing.

"That appearance of a navel on the orange is the result of a mutation," Moses says. The mutation created a conjoined twin — an aborted second orange at the opposite end from the stem. "Looks like a human navel," Moses says, but "it's in fact a small, second orange."

And the mutation that started it all? A single branch on a sour orange tree in the garden of a monastery in Brazil.

A Presbyterian missionary came upon it in the mid-1800s. It intrigued him that not only did the orange have a bellybutton and baby orange inside — it was sweet, and had no seeds.

He made a cutting, propagated some little trees, and sent them to William Saunders at the USDA in Washington.

"Because the navel orange through that mutation is seedless," Moses says, "all of the navel oranges that we see today and we eat today are genetically identical with the original orange."

That's right. The produce aisle is filled with clones of that one mutation from Bahia, Brazil.

Of course, a seedless orange has no way to reproduce naturally, so a nurseryman has to give Mother Nature a little assistance by grafting sprouted buds onto another tree's trunk and roots — just as Saunders did at the USDA back in the 1800s.

How The Navel Orange Traveled To California

Saunders had a neighbor in Washington named Eliza Tibbets. According to Moses, when Tibbets' husband blew the family fortune, the couple headed West. They landed in the new Riverside Colony around 1872. It had a nice, Mediterranean climate, and the residents were staking their future on subtropical fruits. Tibbets was their golden ticket.

Saunders sent his former neighbor two or three little starter trees. If there was a third one, it's said to have been trampled by Tibbets' cow, Moses says, but either way, two trees grew to maturity.

"Fruits from those trees — seedless, as predicted and as promised, turned out to win a citrus fair in the Riverside area, and were declared the most spectacular citrus fruit anyone had ever seen or ever tasted," Moses says. "And bam, there you have the rise of what became the immensely successful commercial navel orange industry."

One of Tibbets' two trees, by the way, still stands and bears fruit, at the corner of Magnolia and Arlington in the middle of Riverside. Its roots have been swapped out, and its fruit is kind of small these days, but it still holds quite a story.