Accessibility links
Teen Guitarist Begs for Lessons Timothy Callobre's parents hoped he'd be drawn to the piano they had in their home. Instead, at age four, Timothy insisted on taking guitar lessons. Now it's paying off. Legendary guitarist Christopher Parkening says Timothy has "wonderful technique and innate musicianship." Timothy, now 13, plays the Choros No. 1 by Villa-Lobos. 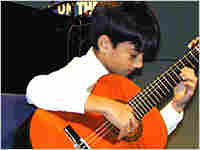 Timothy Callobre is something of a From the Top old-timer, having first appeared in the program when he was just ten years old. At age 13, he made a return visit, at which time legendary guitarist Christopher Parkening described the young musician as having "a wonderful technique and excellent natural innate musicianship."

Early on, Timothy Callobre's parents hoped he would be drawn to the piano they had in their home. But already at age four, Timothy insisted on guitar lessons. His parents thought he'd grow out of his guitar obsession, but instead it grew. Finally the parents gave in. "He kept after us from the time he was four to almost eight years old, and he didn't let anything sway him," says Timothy's mom. "Finally we broke down and gave him lessons, and I'm so glad we did!"

Timothy, plays the Choros No. 1 by Heitor Villa-Lobos.