Accessibility links
Valentino: A Stylish Career Laid Bare Valentino is a star who shines in the firmament of haute couture — he dressed Audrey Hepburn, Jacqueline Kennedy Onassis and Gwyneth Paltrow. But the story of the man is really the story of a relationship that's lasted throughout his 45-year career. 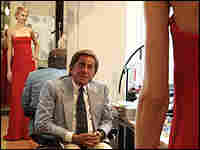 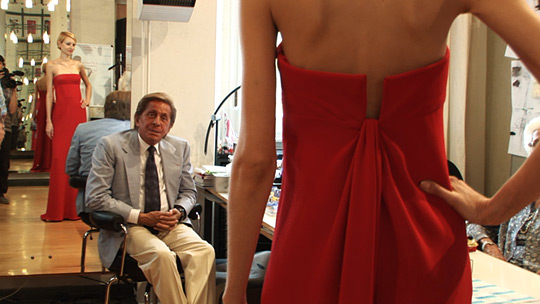 A film still from Valentino: The Last Emperor.

Big personalities rule the fashion world, but Valentino Garavani took it to a whole different level.

Valentino is a star who shines in the firmament of haute couture — he dressed Audrey Hepburn, Jacqueline Kennedy Onassis, Vogue's Anna Wintour and Gwyneth Paltrow.

When asked by a reporter, "What do women want?" Valentino replied, "I know what women want. They want to be beautiful."

His reign lasted 45 years. He announced his retirement two years ago at age 75.

The story of his career is intrinsically linked to the story of Giancarlo Giammetti, his partner in life and business. Valentino designed the dresses, Giammetti crunched the numbers, and together, the two rose to the top of the industry.

Matt Tyrnauer wrote about the two for Vanity Fair five years ago, and he's the director of the new documentary Valentino: The Last Emperor.

The film is a fly-on-the-wall look at Valentino in the years before his retirement.

Tyrnauer says Valentino is a simple guy to understand.

"He's only interested in aesthetics and beauty — beautiful dresses — and also the fame and fortune of Valentino," he says. "Giancarlo Giammetti, the partner — very complex. And you see the dynamic of these two men, and it's really the story about how you get there with someone else."

Despite their fame, Valentino and Giammetti didn't warm completely to the cameras. Tyrnauer says the film threatened to ruin the perfect image Valentino had spent decades building for himself.

"This movie really threatened him, because he saw that we were capturing him in unguarded moments when he was showing the real Valentino. And he hated that," he says.

At one point, Valentino is looking at an exhibit in honor of his 45th anniversary as a designer — a three-story high wall filled with mannequins dressed in his most famous dresses — and he hates it, yelling at the camera crew to stop filming him.

"What he saw looked like a catacomb. And he saw these mannequins that looked like bodies," Tyrnauer says. "He was having a devastating personal crisis, because here you see someone in the third act, preparing to retire ... not having come to terms with that, and it's kind of like a death."

The film also shows a bit of Valentino and Giammetti's lavish lifestyle — the villa in Rome, the corporate jet, the yacht, the five pampered pugs.

"There's a chateau near Versailles that is not to be believed. It was the chateau of Louis the XIV's mistress, in fact," he says. "Someone did say to me, the movie is what it would be like to follow Napoleon around with a camera. I don't know if that's entirely fair to either man."

Tyrnauer says the world will never see another Valentino. The economy has changed, women's tastes have changed, and the fashion industry has been overtaken by corporate interests.

"Valentino was literally, to use the cliche, a boy with a dream," Tyrnauer says. "Today, it's the money that makes the decisions, and they pick the talent. So you'll never have someone again who is able to start with nothing and make their way to the multibillion dollar level."