Accessibility links
Alfre Woodard Brings True Story To Screen Award-winning actress Alfre Woodard stars in American Violet, a new film based on the story of Regina Kelly of Hearne, Texas. Kelly, a single mother of four, was unjustly accused of dealing drugs. Woodard talks about her role and the film's importance. 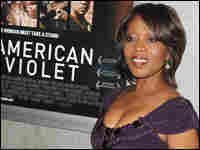 In 2000, Regina Kelly was unjustly arrested during a drug raid in Robertson County, Texas. Accused of dealing drugs, Kelly, a young African-American woman and the mother of four girls, was told to either plead guilty and receive probation, or go to trial and face a lengthy jail sentence. Instead, she decided to fight back.

American Violet depicts Kelly's story and her family's struggle to win back her freedom. Award-winning actress Alfre Woodard plays the mother of Dee Roberts, the character based on Kelly.

"She is very practical. She has four grandbabies. I wanted her not to be that heroic mom saying, 'You know, I will take care of the kids ...' No. 'You have children, you need to get your butt out of there,' " says Woodard, speaking about her character, Alma Roberts.

The film tells the story of a racial disparity in the criminal justice system. Together with Kelly, more than two dozen residents of Robertson County were arrested and charged with drug distribution.

"You're taking that stand against the power structure. You are standing there small, in your bare feet in the dirt, and you say, 'No.' Those are the people that we all must take a stand with, so that nobody ever stands it alone," Woodard says.

Hear the full interview with actress Alfre Woodard, by clicking the "Listen" button in the upper left-hand corner.