Accessibility links
To Fight Malaria, Scientists Target Old Mosquitoes Insecticides can kill mosquitoes that spread malaria, but some super-mosquitoes are immune to insecticides. Now, researchers think they've found a solution. Since most mosquitoes don't live long enough to transmit malaria, researchers are working on a fungus that kills only the older mosquitoes most likely to carry the disease. 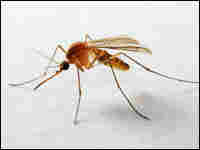 An insecticide aimed only at old mosquitoes could solve a major problem in malaria eradication, say Penn State researchers.

About every 30 seconds, malaria kills a child somewhere in the world, according to the World Health Organization. It kills about one mother every hour.

Earlier this month, Andrew Read of Penn State University and his colleagues proposed a solution: Kill only the older mosquitoes that actually transmit malaria. They describe their theory in Public Library of Science Biology.

The ability of mosquitoes to withstand insecticides was first noticed after World War II and continues to be a significant problem.

"Insecticides are such a good way of controlling malaria, we need them to continue to work," says Read. "The problem is if you get resistant mosquitoes spreading in a population, then most of the mosquitoes are no longer controlled by the insecticide, and malaria comes back."

Read and his colleagues are looking to exploit a key feature of the malaria life cycle. When a mosquito feeds on a person with malaria and picks up malaria parasites, it can't transmit those parasites right away. The parasites circulate and develop in a mosquito's body for 10 to 14 days before getting into the mosquito's saliva. From there it can be transmitted to the next human that the mosquito bites. Mosquitoes live a harsh life, Read says, and most don't live long enough to transmit malaria.

It's an interesting idea, says Anthony Fauci, head of the National Institute of Allergy and Infectious Diseases, which funds research on malaria treatment, prevention and eradication. "If mosquitoes did not develop resistance to insecticide, one limb of the malaria control program would be much more robust and effective."

Read and his colleagues are working on a fungus that kills mosquitoes after 10 to 12 days, targeting the older mosquitoes most likely to carry malaria. He says he'll be ready to field-test the fungus in a year or so.

An additional strategy Read suggests is to use lower doses of existing insecticides, which would take longer to kill and thereby select the older mosquitoes for death.