Accessibility links
What If Marijuana Were Legal? Possible Outcomes NPR came up with a hypothetical scenario and asked experts to respond: Marijuana has been legal in the U.S. for two years. Legally, it is treated similar to alcohol: It is taxed and regulated, and users must be 21 or older. Under these parameters, what are some possible outcomes? 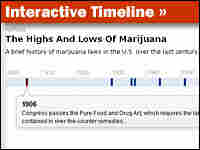 There's a surge of public interest in legalizing marijuana as a partial answer to a host of problems. Last week, Mexico's congress debated legalizing cannabis as a way to undermine cartel income. And when President Obama held his online town hall last month, he was swamped with the question: Why not legalize pot as a way to help the economy?

NPR came up with a hypothetical scenario and asked experts to play along, commenting on their imagined outcomes. The scenario: Marijuana has been legal for two years throughout the U.S. It is treated, in the eyes of the law, similar to alcohol. It is taxed and regulated, and users must be 21 or older. Pot smokers can buy it by the gram at licensed dispensaries. Predictably, the law change would make some people very happy — and others deeply concerned.

Imagine if you turned on the radio and heard this: "From NPR News in Washington, I'm Carl Kasell. After 70 years of prohibition, marijuana becomes legal today for personal consumption throughout the United States for persons 21 and older "

How would the world change if cannabis finally came out of the closet, if it were fully legal to possess, sell and cultivate?

Willie Nelson, the 76-year-old iconic balladeer and cannabis connoisseur, says there are pros and cons.

"We don't worry about going to jail anymore for smoking it," he says. But, "a lot of our old friends who dealt it are out of work."

In Austin, Texas, the legal cannabis created a surge in business at head shops such as Oat Willie's.

"There's the most popular one, the Volcano," says Doug Brown, the store's longtime general manager, pointing to a conical device that is supposed to provide a milder smoking experience. "It's very expensive — $575 — and they're hard to get hold of."

In the two years since legalization, Brown has noticed new customers, many of whom are older.

"More affluent people, more fun people — people that have never done it before, but have decided to try it since it's now legalized," he says.

One of the new marijuana epicures is Sarah Bird, a middle-aged novelist in Austin and columnist for Texas Monthly Magazine. She says she hadn't smoked marijuana much since her college days.

"It's been a godsend for the temperamentally tense such as myself," Bird says. "And it's really been a boon to getting me off my addiction to Ambien and Yellowtail Merlot."

"What's not to like?" Bird asks. It's low-calorie, she doesn't wake up hung over, it's great for the libido, and it's popular at dinner parties, baked into Belgian chocolate brownies.

But most of all, she adds: "You know you're not contributing to the Sinaloa Cartel and you're not destabilizing Mexico. And in my case, as a parent, I'm not modeling criminal behavior for my child."

At the University of Texas at Austin, Kevin Prince, coordinator of UT's alcohol and drug program, says he's seen a spike in pot smoking since it became legal. This is troubling to him because national studies show that sustained marijuana use directly affects academic achievement. 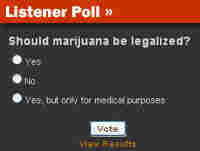 "One of the main issues is there's still a mystique when it comes to marijuana use," Prince says. "A lot of people still don't know that marijuana use is addictive. If you're spending more time smoking weed than going to class or going to work, that's a problem."

Not everyone uses it recreationally. The end of cannabis prohibition has been a blessing for Marsha, a medical marijuana user with multiple sclerosis. Sitting in a wheelchair in a friend's backyard in Houston, Marsha says she smokes weed to "escape from my body" and the chronic pain caused by nerve damage.

"Oh, what a relief it is not to be home alone wondering if this minor-league marijuana user, if the cops were gonna come bust me down," she says. "It's nice to feel free."

Free at last to smoke marijuana: Since the prohibition on cannabis ended, has it delivered the results its supporters claimed it would?

With the spiraling drug mayhem in Mexico, some Latin American leaders looked at legalizing marijuana as a way to deny the murderous cartels a portion of their profits. When it was banned, marijuana was the greatest source of income for Mexican traffickers. Now that it's cultivated domestically and sold legally, surely that has crippled the cartels?

"These are crooks. You're not gonna take 'em out of the criminal activity business," says Robert Almonte, who worked narcotics for 25 years with the El Paso Police Department, just across the river from the ruthless Juarez Cartel. "Because drugs are legalized, they're not gonna say, 'Let's go back to school and get an honest job.' "

Almonte, director of the Texas Narcotic Officer's Association, says all cannabis legalization has done is force the drug mafias to improvise.

"As far as marijuana is concerned, they have been selling it less expensive than what it can sell for here in the United States," Almonte says. "But more importantly, we're seeing a more potent marijuana. And with that we're seeing an increase in the emergency room admissions."

A similar observation comes from William Martin, a drug policy expert and senior fellow at the James A. Baker III Institute for Public Policy at Rice University in Houston.

"Just as after the repeal of prohibition, organized crime got into many other kinds of activities — protection money, control of the laundry business — so the drug cartels are quite flexible," Martin says. "They've diversified into kidnapping, human trafficking, protection other crime. And they're still selling cocaine, heroin and meth, which are highly profitable. So unfortunately, it has not hurt them as much as we'd hoped."

Supporters of legalization say one of the undeniable benefits has been the reduction in criminal cases that have clogged courts.

"I used to represent a lot of marijuana smokers and dope dealers," says Gerry Goldstein, a prominent criminal defense lawyer in San Antonio.

Though he is not billing as many hourly fees these days, he believes that's a good thing for the criminal justice system.

"Back in 2006 to 2008, 45 percent of all drug arrests in this country for the most part were marijuana offenses," Goldstein says. "That's a staggering waste of resources of our law enforcement."

And it left young people scarred with criminal records for something that is arguably less dangerous than alcohol, Bill Martin says.

"If they were convicted, they could lose employment, child custody, student aid, voting privileges, some welfare benefits. They could even forfeit assets like cars or houses. The new regime has eliminated that. Problem users are now being treated as a public health matter and not as a criminal issue, and that's appropriate," he says.

Since marijuana became legal, farmers around the country — illicit and formerly illicit — have scrambled to put Cannabis sativa seeds into the ground. Under the law, they pay $1,000 for a state license, whether their crop is hydroponic or soil-grown.

"The marijuana crop's been going really good. Just wait till the last frost, just start puttin' the plants in the ground, and add a little nitrogen fertilizer to give you a lotta leaf, and after that it just grows like a weed, which is what it is," says Larry Butler. He stands among the crop rows at his Boggy Creek Farm, a 5-acre certified organic urban farm in Austin, Texas.

His wife, Carol Ann Sayle, says they've been a bit disappointed by their newest cash crop and are nervous about losing the farm's family ambiance.

Jeffrey Miron, a Harvard economist who has modeled and written on the economics of the marijuana market, figures state and federal taxes on cannabis sales add up to $6.7 billion annually.

And he calculates the savings from not having to enforce state and federal marijuana laws — in arrests, prosecution and incarceration — at $12.9 billion a year. Excluding additional expenses, such as the public health cost of marijuana, or the cost of administering the new law, Miron figures that legal pot creates almost a $20 billion bonus. Miron adds, however, that the people who thought the taxation of marijuana would create a windfall for government coffers will be disappointed.

There Are More People Smoking It

Now that marijuana is legal to possess, use, process, transfer, transport, retail, wholesale and cultivate, has the United States become a nation of potheads?

The Dutch experiment offers an interesting case study. After marijuana was decriminalized there in 1976, pot smoking didn't jump in Holland, and it remained well below U.S. levels. But it rose sharply after coffee shops opened in the 1980s and began openly selling cannabis. The U.S. already has a huge appetite for drugs: It's the largest illegal narcotics market in the world. Half of all high-school seniors have used pot.

Drug policy analysts interviewed for this report believe that now that marijuana is legal and socially acceptable in the U.S., there are more people smoking it. And some of them are kids.

"They'll start using it sooner now because it looks like it's more OK, seems less harmful, because they see their parents doing it," says Rosalie Pacula, co-director of the Drug Policy Research Center at the RAND Corp. "Do we know how to keep kids from drinking alcohol? No, we don't. So why would we expect we'd be any better at it with marijuana?"

And the reason we should care is because of the effect that marijuana can have on the development of adolescent brains, says Dr. Vicki Nejtek, a research doctor who works on drug abuse at the University of North Texas Health Science Center in Fort Worth.

"We know that marijuana use and chronic use, as it is now, in an adolescent population can cause extreme developmental delay," Nejtek says. "We know the myelin sheath around our brain cells acts like an insulator to an electric cord. When that's stripped away, it can cause memory loss, it reduces our ability to concentrate, and a reduction in brain cell activity."

In 2007, 14.4 million Americans ages 12 and older admitted to survey-takers that they had used pot in the past month. Rice University's Bill Martin believes, now that it's legal, about one-third more people are using marijuana — maybe 19 million Americans. Martin believes legal pot — which is, after all, an intoxicant — has been good for society but bad for young people.

"I have nine grandchildren," he says. "I would prefer that none of them use marijuana to any significant extent. I have seen students, I've seen friends, become less interesting."

NPR's fictitious scenario of legalized marijuana is not likely to come true anytime soon. Most states are still fighting to legalize medical marijuana and decriminalize marijuana penalties, much less seriously considering legalization. President Obama is on record opposing legalizing pot as a way to boost the economy. For now, whether legal cannabis would cause an outbreak of reefer madness or make more people just mellow out, makes for an interesting parlor game. But it's only a pipe dream.