Accessibility links
Zuma Favored To Be South Africa's Next President The controversial leader of South Africa's African National Congress will likely become the country's next president. A polygamist who has faced rape and corruption charges, Jacob Zuma is also a populist who has widespread respect for his role in winning black rule for South Africa.

Listen
Zuma Favored To Be South Africa's Next President 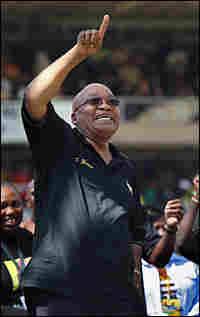 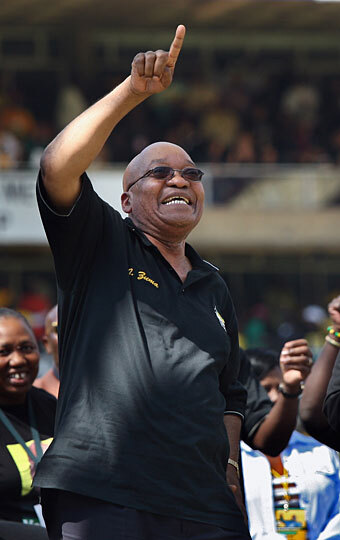 The ruling African National Congress is widely predicted to win Wednesday's election in South Africa, a victory that would likely make party leader Jacob Zuma the country's next president.

A man who stirs controversy, Zuma is a polygamist who has faced rape and corruption charges.

But he also is a populist, widely respected for his part in the battle to win black rule for South Africa.

Born 67 years ago in poverty-stricken KwaZulu-Natal province, Zuma grew up without a father. He helped his mother, a domestic worker, by working as a cattle herder and kitchen boy, and he never received formal education.

"He's always been one of the warrior elite of the movement," says Dali Tambo, who grew up hearing about men like Zuma. His father, Oliver Tambo, was the ANC's president in exile for more than two decades and acted as a mentor to Zuma.

Zuma fought for his country's liberation from apartheid — including joining the ANC's armed resistance and spending a decade imprisoned on Robben Island with Nelson Mandela.

Lately, Zuma has had to fight for his political life.

In 2005, an HIV-positive woman accused Zuma of rape.

Though acquitted, he was widely lampooned for testifying that taking a shower was his only precaution against contracting HIV, the virus that causes AIDS.

The same year, Zuma was tainted in a corruption case involving a French arms company seeking a multimillion-dollar deal with South Africa.

Because of the charges, South African President Thabo Mbeki fired Zuma as his deputy president in 2005.

From then until earlier this month, Zuma faced various corruption and fraud charges, all of which were eventually dropped. But they continue to cast a shadow.

Zuma insisted that the charges were politically motivated as he and Mbeki fought for control of the African National Congress. And despite the court battles, Zuma won control of the ANC last December, setting the stage for his likely ascent to the presidency.

Zuma has said repeatedly that he is innocent.

When the prosecuting authority recently dropped charges on a technicality, Zuma addressed the nation in a media conference that was broadcast live:

"My conscience is clear. I have not committed any crime against the state or the people of South Africa," Zuma declared. "I've been clearly vindicated."

Mandela, the country's first black president and its moral leader, has not commented directly on Zuma's candidacy. But he shared the stage with Zuma at a massive rally in Johannesburg on Sunday. It was a rare public appearance by the frail, 90-year-old Mandela that many here viewed as a stamp of approval.

Opposition parties insist they will see to it that Zuma has his day in court. The leader of South Africa's opposition Democratic Alliance party, Helen Zille, says there is still much evidence against Zuma.

"There's a huge case against him, with 93,000 documents. No one has ever disputed the validity of those documents or the strength of that case, and that needs to go to trial," Zille says.

'Suspicion Stacked Against Him'

Opinion polls predict that the ANC will win the election with at least 60 percent of the vote. The president is then elected by parliament.

In a recent editorial, The Sunday Times wrote: "[Zuma] will assume the mantle of Nelson Mandela with suspicion stacked against him and the perception widely held that he can be bought. ... Critics and avowed foes will be watching for the first sign of moral turpitude."

A similar theme has been struck by COPE, an opposition political party formed in December by breakaway ANC members angered that Mbeki was forced out by Zuma last fall. Its presidential candidate, Mvume Dandala, who is a cleric, also argues that Zuma has not cleared his name.

"It is unfortunate when there are very crucial issues — issues relating to corruption and so on — that are being asked, for a person not to stop and clear those first and then come and be available to the nation. I would have been happier for Mr. Zuma to actually become president having demonstrated and proven to the South African people his innocence of the things that are being alleged against him," Dandala says.

But George Lebusa, who recently organized more than 500 church leaders to endorse the ANC manifesto, says Zuma is a person with "a heart for people."