Accessibility links
CIA Exempt On Torture, But Not Lynndie England Obama's decision not to prosecute CIA agents for torture has incited bitter debate. It's also raised questions about punishment already meted out to those low-ranking soldiers like Lynndie England, convicted in the 2004 abuse scandal at Abu Ghraib prison. 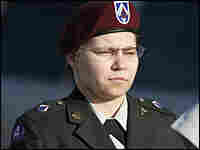 Pfc. Lynndie England, seen here arriving for her court martial at Fort Hood in Texas, served one and a half years in military prisons, and an equal time on parole, for her part in the Abu Ghraib scandal. Some question why low-level soldiers like her got punished while CIA agents and others won't be prosecuted for their role in the use of torture. Taylor Jones/Getty Images hide caption 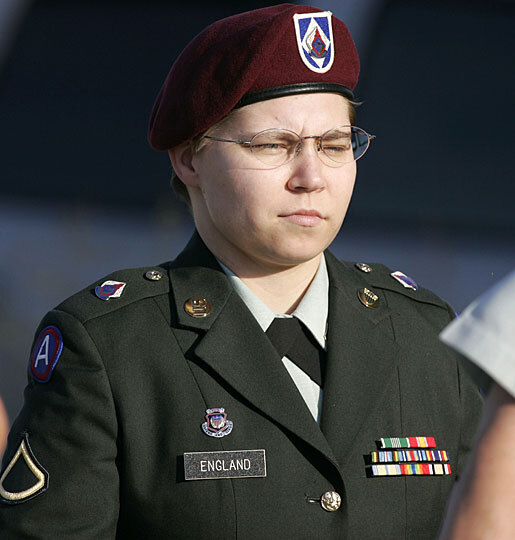 Pfc. Lynndie England, seen here arriving for her court martial at Fort Hood in Texas, served one and a half years in military prisons, and an equal time on parole, for her part in the Abu Ghraib scandal. Some question why low-level soldiers like her got punished while CIA agents and others won't be prosecuted for their role in the use of torture.

President Obama's decision not to prosecute government lawyers who wrote Bush-era memos authorizing torture at CIA prisons — or the CIA officers who carried out the harsh tactics — has incited bitter debate.

White House aides making the talk show rounds have defended the decision as a deliberate effort to look forward instead of back, and to maintain morale at the CIA during perilous times.

"We have turned the page on this episode in our history," senior adviser David Axelrod said Sunday. "We're moving past all that."

But the lack of punishment for the severe interrogation actions that ravaged the nation's moral standing in the world has infuriated civil libertarians here and abroad.

And it has raised questions about punishments — including prison terms — already meted out to nine soldiers convicted in the 2004 abuse scandal at the Abu Ghraib prison in Iraq.

'This Is Not Justice'

"Every American should be outraged," says Roy T. Hardy, who represents Pfc. Lynndie England. The 22-year-old Army clerk became the international face of the Abu Ghraib scandal when photos of her in poses with naked Iraqi detainees shocked the world.

"Obama, who I love to death, is not going to punish CIA agents for doing what they were told to do," says Hardy, England's civilian lawyer, "when those torture memos gave them permission to do more than what was ever done at Abu Ghraib?"

Convicted in 2005 of maltreatment and conspiracy for posing in those pictures, including one in which she held a leash around a prisoner's neck, England has already served one and a half years in military prisons, and an equal time on parole.

Now 25, she is living with her family and 4-year-old son in Fort Ashby, W.Va., and is appealing her dishonorable discharge.

"This is not justice," Hardy says. England's military lawyer, Capt. Tim Thomas, could not be reached for comment Monday.

England's former military counsel, Jonathan Crisp, who represented her at trial, said Monday that he was in the midst of a murder trial and didn't have time to comment on her case.

But both Hardy and author Gary Winkler — whose biography of England, Tortured: Lynndie England, Abu Ghraib and the Photographs That Shocked the World, is expected to be released in June — say they hope that the advance exoneration of the CIA and its officers will help England at least soften the terms of her discharge.

Best case? A presidential pardon, both say, but a highly unlikely prospect.

'How Can We Prosecute Young People Caught Up In A Mess?'

"The injustice really smacks you in the face," says Winkler, whose writings focus on the people and places of Appalachia.

"If we're not going to prosecute the higher-ups, or even the civilian contractors, how can we prosecute young people caught up in a mess for doing stuff that was mild compared to Bagram?" he says.

Bagram is a U.S. internment center in Afghanistan where prisoners were tortured, and at least two were murdered, according to military coroners. The White House has not ruled out prosecuting those involved in abuses that went beyond harsh actions allowed in the so-called torture memos written by Bush administration lawyers.

Neither Hardy nor Winkler said they were speaking out to condone England's participation in the picture-taking humiliations at Abu Ghraib. Both say there were situations she could have walked away from.

Winkler has spent the past eight months interviewing England and those who know her. He describes the young woman as compliant and deferential to authority figures.

That included her boyfriend at the time, Charles Graner Jr., an Army reservist sentenced to 10 years in prison for his role at Abu Ghraib. Graner, who has since married fellow Abu Ghraib guard Megan Ambuhl, has challenged England's claim that he's the father of her son, and recently demanded a DNA test to prove paternity. Ambul pleaded guilty to two minor charges related to the Abu Ghraib scandal, but served no prison time.

England and her family are still "shell-shocked," Winkler says. With a felony conviction, she has been unable to find work. Though she has yet to be formally discharged from the Army, her pay and benefits were halted with her conviction.

Winkler says his book will be an attempt to put England's life in context.

Part of that context, Hardy says, is the government's reliance on people like England, poor and patriotic, to fight the country's wars.

'Not Much That Can Be Done At This Point'

Eugene Fidell, who teaches military law at Yale University, says that "there is a bind between the fact that England did time, and the people who many Americans believe have done far worse are not going to be criminally punished."

"I wouldn't fault her for making the argument," he says. "But there's not much that can be done at this point besides changing the character of her discharge."

If England successfully argues to change her dishonorable discharge to a bad conduct or an administrative discharge, she may be eligible for some health benefits, Hardy said.

President Obama could also give instructions to abate the proceedings against England, and he could even give her a pardon, Fidell says.

But that would be a rare presidential move, he says, and not something Obama is likely to do.

"I know that there are a lot of people who are very disappointed in the president," Fidell says. "But people should really be angry with President Bush and the people who brought us to this dreadful set of choices in the first place."

He adds: "I'm sure [Obama] is very conflicted in having to give people a free pass simply because some people holding law degrees cranked out some bad advice under his predecessor."

That's small consolation to Hardy, who sees his client as a convenient and powerless scapegoat for bad that happened during the Bush years.

"She was never convicted of abusing a prisoner, of withholding medical aid, food or water," Hardy says. "She was convicted of the act of jumping in the picture."

"That's nothing compared to what President Obama just said we're going to excuse," he said. "Nothing."