Accessibility links
Can Los Angeles Make Skid Row Safer? In 2006, the city of Los Angeles decided to crack down on crime and bring some order to Skid Row by introducing the Safer City Initiative. Critics say the program is not just targeting criminals — it's also criminalizing homelessness. 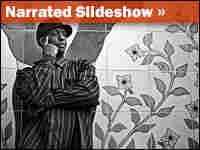 Willie Brown, 55, who has been living in Skid Row for 25 years, plays chess with a friend in Gladys Park. Justin Maxon/Aurora for NPR hide caption 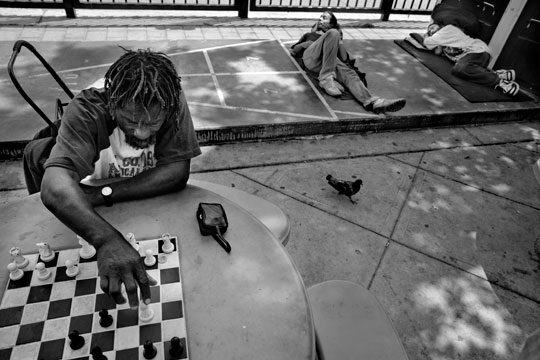 Willie Brown, 55, who has been living in Skid Row for 25 years, plays chess with a friend in Gladys Park.

A Business Improvement District worker or "Red Shirt" wakes up a woman at 6:15 a.m. Skid Row dwellers who sleep past 6 a.m. risk getting a ticket. Justin Maxon/Aurora for NPR hide caption 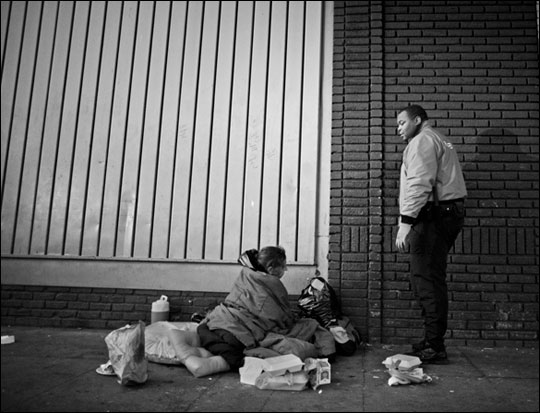 A Business Improvement District worker or "Red Shirt" wakes up a woman at 6:15 a.m. Skid Row dwellers who sleep past 6 a.m. risk getting a ticket. 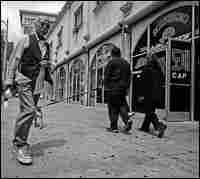 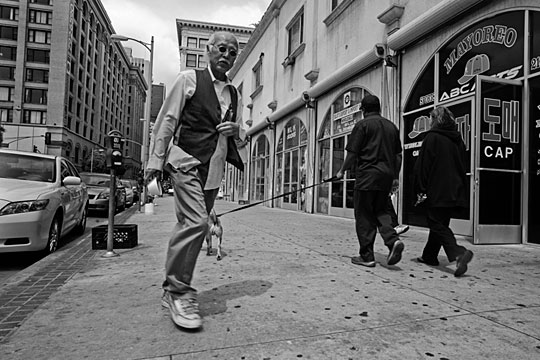 Shortly after noon, shoppers fill the streets. Six hours earlier, this area was covered in tents.

Los Angeles' Skid Row is home to thousands of people with no permanent place to call home. The sidewalks used to be lined with tents and makeshift shelters at every hour of the day. It's been a haven for drug dealers and prostitutes.

But late in 2006, the city of Los Angeles decided to crack down on crime and bring some order to the teeming streets. The program designed to do that is known as the Safer City Initiative. It has its critics. They say it's not just targeting criminals — it's also criminalizing homelessness.

One night a month, L.A. City Council member Jan Perry leads a walk around Skid Row. It's in her district, and she wants to monitor the changes that have taken place in the two and a half years since Safer City began. She says the area used to be like "Dante's 'Inferno.' Now it's like a neighborhood." She believes that the Safer City Initiative proves the city is showing Skid Row respect, "and that certain behaviors that have been tolerated in the past will no longer be tolerated."

The change in Skid Row is apparent not only to city officials, but to veterans of the streets. And no one is more veteran than Benny Joseph. "I been on the street 30 years," he says. "On the street!"

Benny Joseph was riding a bicycle — and carrying a cane — as he paused for a breather in Gladys Park, a place once notorious as a drug market and shooting gallery. He says it's a lot better now.

"Oh, this was a goofed-up park," he says. "I'm telling you, this was a crazy park. I seen people get damn near beat to death. And no one called no police. They'd just leave him there. If he was dead, they'd find him in the morning."

There's still a lot on Skid Row that is — to use Benny Joseph's term — goofed up. Skid Row was once such a wide open drug market, buyers and sellers would come here from all over the city. Rival gangs didn't even bother fighting for territory. There was plenty of business to go around. Walking the streets with Los Angeles Police Department Officer Deon Joseph (no relation to Benny), it seems like there still is.

Outside of San Julian Park, he points to an older African-American man in a wheelchair. He says he's called One Leg. "He sells weed over here," says Officer Joseph, as he walks over to him.

"Are you selling weed on my block, man? " the police officer asks him. One Leg says no, he's just smoking. But the officer says, "if you're selling weed, I need you to leave."

And One Leg is gone in a flash.

Deon Joseph gives the impression of a guy who gets what he wants. He's a barrel-chested black man with a shaved head and muscular arms nearly bursting the sleeves of his uniform. He cuts quite a figure. Visibility, he says, is all part of police work.

"The only tool we have is to stay visible and stay out here and deter them with my visibility," he explains. "Me standing on this block, it's the safest block in the United States of America."

The police are more visible than ever on Skid Row. The Safer City Initiative added 50 cops to this 1-square-mile area. But it's not their increased presence that's the source of the controversy over Safer City; it's encounters like the one between Officer Joseph and a man lounging on the sidewalk in front of the Chicken House restaurant.

The officer approaches the man and tells him he's not allowed to sit there, and politely urges him to get up. The man moves on without an argument.

He probably knows that sitting on the sidewalk during the day is not allowed on Skid Row anymore. The police give out tickets for that. Joseph is ready with an explanation of how something that seems so innocuous can bring down the neighborhood.

"If we let one person sit on the sidewalk, then it's going to be two, three, four, five," the policeman says. And the problem with that, he says, is that "a lot of people are drug addicts, they're going to start smoking [crack]. And the drug dealers are going to come ... and say, 'Oh, cool, anybody want more?' Then the gangs are going to say, 'We can make money off of this.' " All from just one person sitting on the sidewalk.

So when the Safer City Initiative started, the police began handing out tickets on Skid Row for sitting on the sidewalk, jaywalking, littering and drinking in public. According to a study at UCLA, police officers wrote about a thousand tickets a month during the first year of the program. LAPD records indicate that they're writing fewer of them now. Still, even a single ticket would be one too many for Casey Horan. She's the executive director of Lamp, a Skid Row organization that works with the mentally ill.

That seems to be the case for 31-year-old Jason Diamond. He's a former crack addict who lived on the streets for the better part of 10 years. He says he's definitely gotten his share of attention from the police.

"I have probably right now maybe between 10 or 15 tickets" for littering, jaywalking and drinking in public, Diamond says.

Diamond now lives at Lamp, where he's being treated for major depression and mood disorders, among other problems. When he gets tickets, he explains, he just can't keep track of the court dates.

"Or if you enter a plea of guilty, they want you to pay money," he says. "And I'm homeless. I don't have the money. So what happens is you fail to appear in court, it turns into a warrant for your arrest. So the next time you get stopped, they can take you to jail right there and then."

Diamond guesses he's been in the downtown jail known as Twin Towers 25 or 30 times, just for tickets. And he says that's pretty common.

City officials resent it when the Safer City Initiative is portrayed as just a law enforcement program. There's more to it, they say, from trimming Skid Row trees to prosecuting hospitals that dump indigent patients there. Ask Mayor Antonio Villaraigosa about Safer City, and the first thing he wants to talk about is housing.

Actually, the city has funded those units. Most are not complete, and many have not even been started. The law enforcement component, however, has been going full tilt for two and half years. And that's a good thing, says the mayor.

"No community in Los Angeles would accept the level of violence and crime that this area of the city has had to withstand over the decades," Villaraigosa says. "We all have a right to a safe neighborhood."

Crime is, in fact, down significantly on Skid Row, as it is across the city. The population on Skid Row's streets is down as well.

Earlier this month, the LAPD counted fewer than 600 people bedding down for the night, a third as many as there were two years ago. That might seem to be a good thing. Only no one is exactly sure where the rest of those people have gone. Maybe they're still homeless in another part of the city with fewer cops.