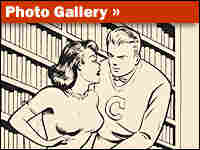 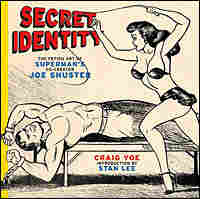 Although I'm a guy who's lived with heroes, most of them were fictitious. But Jerry Siegel and Joe Shuster are right at the top of my list of real-life heroes. While I was lucky enough to know Jerry-- in fact he worked at my bullpen for a while-- I regret to say that I never actually met Joe. That was my loss.

For anyone who's from another planet and unaware of this culturally potent fact, Joe Shuster was the artist who gave us the very first two-fisted comic book crimefighter in a cape and leotard....

It's no secret that Superman was the first of all costumed comic book super heroes and, even today, his image is probably the first that comes to mind when thinking of the phrase "super hero." It's hard to believe that Joe Shuster first drew the man from Krypton's famous alter ego three quarters of a century ago, because that image is still one of the most recognizable in the world.

One of the ironies of life is the fact that in comic book stories the good guy always wins out, and yet in real life neither Jerry nor Joe reaped any vast financial rewards from their creation. In fact, Joe Shuster eventually found himself in a position where he had to accept any art job that was offered to him because of his need for funds. And that brings us to Craig Yoe and the subject of this book.

My colorful friend Craig is an amazing historian who always manages to pull fantastic cultural discoveries out of his propeller beanie hat. It was he who unearthed the unusual material in this offbeat and somewhat startling book. How he found it I'll never know, but it clearly indicates how desperate Joe must have been to have participated in such a project....

The entire story of Joe Shuster, one replete with drama and tragedy, is a tale that has never before been revealed in such a graphic and uncensored manner. Some of the material in the book may seem shocking; some figured strongly in censorship investigations in Congress; but all of it will certainly give you pause as you con¬sider the consequences that can ensue when a gifted man is forced to lend his talent to the most sordid of projects.