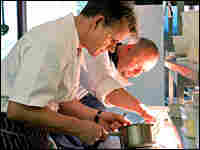 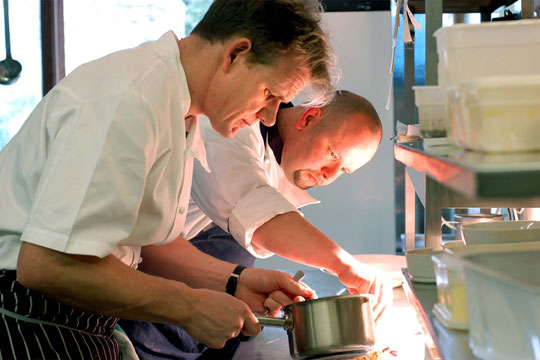 When I was first starting out as a writer, movie directors were superstars and everybody wanted to be a film critic. I remember teasing my paper's restaurant critic that writing about food was the lowest adult job in journalism. Turns out, I've had to eat those words. These days, movies are increasingly kids stuff, and food has become a national obsession. The new superstars are chefs.

None is bigger than Gordon Ramsay, the Scottish born cook who may not be the world's greatest chef — though his restaurants do rank third in total number of Michelin stars — but he is undeniably the world's greatest TV chef. Ramsay doesn't inhabit the backwaters of basic cable or the niche-programming of the Food Network. He has two compulsively watchable prime-time reality programs on Fox, both of them remakes of shows that were already hits in the UK.

The more popular of the two is Hell's Kitchen. It's one of those Darwinian shows like Survivor or Project Runway that weekly renders one contestant extinct. It features a collection of wannabe star chefs who are initially put into teams. Each week, Ramsey orders them to perform various tasks — make tapas out of leftovers, or prepare breakfast for a squadron of soldiers. As the competitors beaver away alongside their backbiting compatriots, Gordon lays on his "advice" like a cross between Simon Cowell and Deadwood's Al Swearingen. Tim Gunn he's not. His idea of saying "Make it work" is "You better make it bleeping work, you stupid bleepity-bleep."

Ramsay's other, and better show is Kitchen Nightmares, which is less about competition than about running a food business. Each week Ramsay goes to a restaurant that's on the verge of ruin and tries to help straighten things out with heavy lashings of advice and disdain — and high praise when it's earned. If you've never seen this show, there's no better introduction than the original, uncensored British version now available on DVD. Indeed, the very first episode is a classic.

Ramsay goes to rescue a bistro called Bonaparte's in a small Yorkshire town with the unlovely name of Silsden. The place is floundering and it doesn't take our Gordon long to see why: The owner, Sue, is clueless and uninvolved. The chi-chi menu is hilariously inappropriate for provincial customers. And to top it all off, the 21-year-old chef, Tim, dreams of being a star TV chef like Gordon Ramsay but has one huge shortcoming: He can't even cook an omelet.

Part of what makes Kitchen Nightmares so utterly fascinating is that it's a wonderful show about process. It teaches you how restaurants work — and how they don't work. Week after week, we meet owners who are scared of their staff or don't know their market, chefs who ruin expensive ingredients with absurdly gimmicky sauces then try to save money by keeping other food till it's tainted. Watching it, you realize the sheer complexity of running a good restaurant — just keeping the orders straight seems exhausting. Which is why when Ramsay revisits these restaurants months later at the end of the episode, they've often fallen back into chaos.

Of course, the show's undeniable draw is Ramsay himself, a mercurial, charismatic figure who's at once charming and hot-headed, generous and vain, sanctimonious and prone to soaring arpeggios of obscenity. Audiences love this kind of oversized guru figure — and Ramsay's like the Dr. House of sick restaurants. He invariably makes places better.

But what gives his act its special tang is that he's a reminder of how much food culture has changed since the kinder, gentler days when Julia Child first began educating home cooks and Graham Kerr, the jaunty metro-sexual known as the Galloping Gourmet, taught Americans to describe a wine as "a sporty little traveler." Now we're in the heyday of TV's bad-boy chefs — Anthony Bourdain, Mario Batali, Jamie Oliver-- for whom even Emeril's "Bam!" seems positively unmanly.

None is more macho than Ramsay, a hulking, one-time pro soccer player whose restaurants may be fussy, even Frenchified but whose personal style comes heavily sauced with testosterone. Watching his shows, one sees just how much male aggression has moved from the playing fields and into the kitchen. In the world of Gordon Ramsay, cooking is an extreme sport.