Accessibility links
The Bad Plus Handles Jazz, Rock With 'Care' It's the tradition of jazz to interact with contemporary popular music, which is exactly what The Bad Plus does. Having just added rock singer Wendy Lewis to its lineup, the energetic jazz trio performs new standards from Nirvana and The Bee Gees in a session from Jazz24.

The Bad Plus Handles Jazz, Rock With 'Care'

The Bad Plus Handles Jazz, Rock With 'Care' 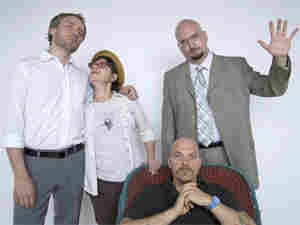 With Wendy Lewis, The Bad Plus adds another interpretive voice to its arsenal. Michael Dvorak hide caption

On its current CD and tour, The Bad Plus — pianist Ethan Iverson, bassist Reid Anderson and drummer Dave King — has temporarily blossomed into a quartet with the addition of vocalist Wendy Lewis. She's a longtime friend of the band from their early days in Minneapolis. Ever since its first CD release in 2001, The Bad Plus has been praised (and sometimes criticized) for its jazz interpretations of contemporary rock and pop songs, such as Nirvana's "Smells Like Teen Spirit."

When the group visited the KPLU studios for this session with music director Nick Francis, it treated us to its versions of Nirvana's "Lithium," The Bee Gees' "How Deep Is Your Love" and an intricately arranged piece dubbed "Metal," a re-working of Gyorgy Ligeti's "Fem (Etude No. 8)."

After performing "Lithium," King explained that it's the tradition of jazz to "have a dialog with contemporary popular music." When The Bad plus first started out, it didn't have enough original material to do a set, so its members brought up the idea of doing pop music.

"We were bringing up songs to Ethan [Iverson], [who] really didn't have any relationship to rock music, so we started bringing up the most obvious tunes," King says. "You know, you'd say, 'Stairway to Heaven' or something, and he was like, 'I don't know that.' Pretty soon, it was like, 'Okay, how about "Smells Like Teen Spirit"? You gotta know that!' And when he didn't know that, that's when we started to realize that maybe that was something interesting — like our interpretation and his interpretation meeting."

A meeting of interpretations is, indeed, what The Bad Plus is all about. In this session, you'll hear four unique musical personalities meeting to create something brand-new.