Accessibility links
Jobless In Washington: Dad, Daughter Wait, Fret In January, Gary and Rachel Peterson learned the sawmill in Aberdeen, Wash., where they worked was closing. It's now April, and their next moves are still unclear — but their worry about each other has only gotten more intense. 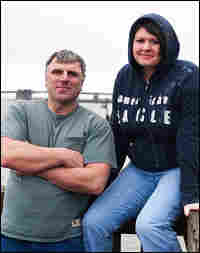 Months after learning their mill was closing, Gary and Rachel Peterson are still unclear about their next moves. Photos by Michael Hanson/Aurora Photos for NPR hide caption 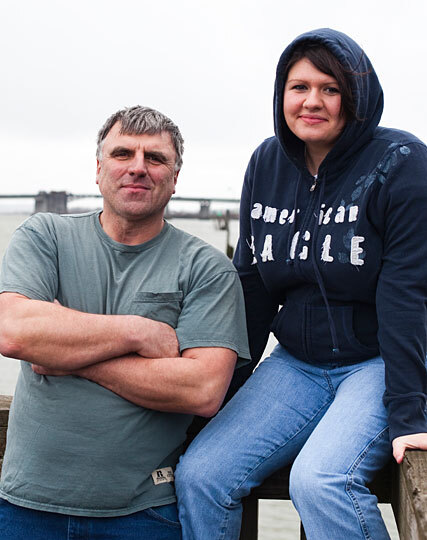 Months after learning their mill was closing, Gary and Rachel Peterson are still unclear about their next moves.

Previous Coverage Of The Petersons 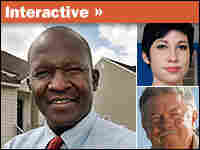 Portraits Of the Unemployed: Meet More Of Our Subjects

As the U.S. struggles with a deepening recession on track to become the worst in more than two generations, the impact is being felt across all states, industries and income levels. Meet some of the faces behind America's unemployment numbers. NPR is checking in with them periodically as they hunt for that increasingly hard-to-find commodity: a job.

NPR first introduced listeners to Rachel and Gary Peterson in February. The father and daughter both lost their jobs when Weyerhaueser announced in January that it was closing its sawmill in Aberdeen, Wash. Rachel was laid off immediately. Gary was kept on temporarily to close down the operation. Four months later, they're still dealing with the change.

A couple of months ago, Gary and Rachel Peterson were a happy father-daughter team, working together at the same mill, living in the same big house with Rachel's husband and her kids.

Rachel says her father would "rather I have a career than have a job where I'm working, living paycheck to paycheck."

Gary worries often about his daughter. And Rachel frets a lot about her father. In the weeks since both learned of the mill closure, their worrying about each other only seems to have gotten more intense.

Since January, Gary has been working on closing down the mill. He has known for almost four months that his 35-year career is over, but he still hasn't really looked for a job.

"My supervisor told me there was a contractor looking for work," Gary says. The contractor told Gary to "come back in a month — which will be next week. So hopefully, that will work out."

Rachel worries that her father has his hopes pinned on that one job. She says she tells him, "You don't want to be sitting here in a month, banking on it, and find out they don't need you and you don't have it."

Gary counters that for now, he is still working Monday through Friday and doesn't have much time for the job hunt. "Once I get laid off," he says, "I will have all day to look for a job, and I will find something."

Rachel's read on this is that her father is scared. He was a great millworker for 35 years. She thinks he is worried he won't be as good at another job and is making excuses.

Rachel is applying for nursing school — which is funny, because two months ago, she said that was not an option. Her father wanted her to go to school, but Rachel felt that she needed to make money — with the mill closing, the family lost two incomes at once. Her husband stays at home with their two children.

But then, just like Gary, Rachel only applied for one job — at another mill. Everything she found was minimum wage.

"I can't go back down to what I made in high school," Rachel says, adding, "School started to look a whole lot better."

Gary wanted Rachel to go to school. But he's still nervous: Just last month, Rachel told him she is pregnant. Gary feels that this is exactly the wrong time for Rachel to have another baby.

Two months ago, the overwhelming mood at the Petersons' home was of waiting — for the mill to close, to see if they got jobs. Two months later, the same feeling prevails.

Gary is waiting to hear about a job. Rachel is waiting for her baby and to hear from schools. So they sit together — CNN on mute, with Rachel's 14-month-old baby being adorable — and they worry about each other.

More In This Series: Portraits Of The Unemployed