Accessibility links
Kalamazoo: A Potential Beacon for Detroit? As Michigan reels from the effects of a sagging auto industry, one city in the western part of the state offers a potential model for the future. Kalamazoo has produced everything from celery to corsets, and residents there consider diversification of industries to be key.

Michigan, the national leader in recession, depends on an auto industry that will never be as big as it was. So how does the Detroit area diversify? Who's hiring, or investing in something new? In the series Retooling Detroit, Morning Edition reports on Detroit's desperate race to replace the jobs that the automakers eliminate. 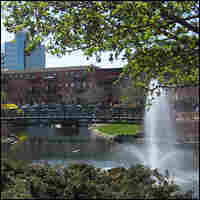 Kalamazoo has had to maintain a more diverse economy than has Detroit. As a result, it has been hit less hard by the auto industry's woes. Dustin Dwyer for NPR hide caption 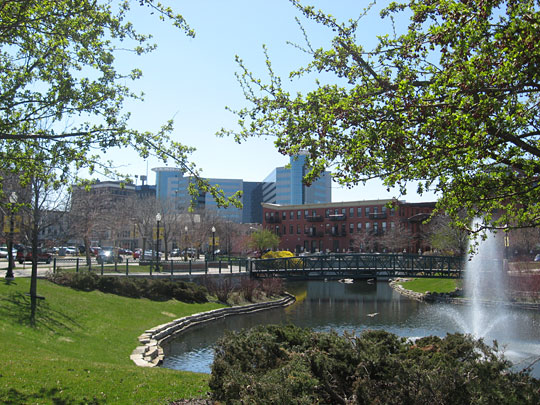 Kalamazoo has had to maintain a more diverse economy than has Detroit. As a result, it has been hit less hard by the auto industry's woes.

Michigan has reached a crossroads in its economy. With the auto industry sagging and statewide unemployment at 12.6 percent in March of this year, Michigan is now forced to examine ways to wean itself from the industry that has sustained it for the past few decades.

On the west side of the state, one city may offer clues on how to do this. Kalamazoo, Mich., has a lower unemployment rate than the rest of the state (9.9 percent) and has a more diversified economy, Dustin Dwyer of Michigan Radio tells NPR's Steve Inskeep.

Ron Kitchens of the organization Southwest Michigan First, which is in charge of economic development for Kalamazoo, says the city has seen many of its industries come and go.

Kalamazoo was home to a large GM auto plant that shut down in the late 1990s. Around the same time, Pfizer acquired the pharmaceutical firm Upjohn Corp., slashing thousands of jobs.

Today that GM plant has been transformed into a distribution center that houses more than a dozen companies. As for the lost Pfizer jobs, hundreds of smaller companies have filled the gap, Dwyer says.

Kitchens says cities that expect big companies to come to town and stay forever have got it wrong.

"It's not the way the economy works any longer, and so we simply have to understand that [the process of] companies changing, and loss is as inevitable a process as them successfully growing and creating," Kitchens says.

One way Kalamazoo has sought to attract companies is its "Kalamazoo Promise," a program guaranteeing that every child who spends at least four years in the city's public schools will get money to go to any school in Michigan. The program is funded entirely by anonymous private donors.

Michelle Miller-Adams, author of The Power of a Promise: Education and Economic Renewal in Kalamazoo, says the Kalamazoo Promise is attracting new companies to the city.

"You invest in the human capital of your young people, you raise the profile of education in your community, and that makes you economically more competitive," says Miller-Adams.

Dwyer notes that with nearly one out of 10 people in Kalamazoo unemployed, the city does not necessarily present an appealing prospect to residents.

Terance Moore, whose aunt is Kalamazoo City Commissioner Stephanie Moore, could have received money to go to school in Michigan through the Kalamazoo Promise. Instead, he decided to go to Morehouse College in Atlanta.

When Moore was still a teenager living in Kalamazoo, police stopped him for excessive noise from his car stereo. The officers' behavior led Moore to file a civil lawsuit against the city for what he considered racial profiling. The suit was settled last year.

"Even when you're coming back to visit, it makes me want to hurry up and go back home to Georgia," Moore says.

Moore is exactly the kind of young, educated person that the city would hope to keep.

"His situation underscores the challenge of building a healthy and diverse city," Dwyer says.

We described the "Kalamazoo Promise" as "a program that guarantees every child who spends at least four years in Kalamazoo public schools ... money to go to college at any school in Michigan." In fact, the money can only be used at any public state of Michigan university or community college.