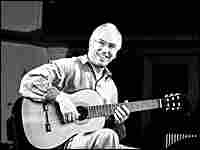 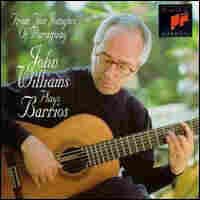 Cueca, for guitar (Suite Andina No. 5)

Preludio for guitar in C minor

When people think of classical guitar music, it's often the Rodrigo Concierto da Aranjuez (which served as the basis for Miles Davis' Sketches of Spain) or Villa Lobos' Guitar Concerto, or anything recorded by the master Andres Segovia. The Australian guitarist John Williams, who studied under Segovia, brought another composer to the "essential" list: The Paraguayan guitarist Augustin Barrios-Mangore (1885-1944), whose music went largely neglected by modern interpreters until the 1980s and '90s. Williams' From the Jungles of Paraguay, an album of solo guitar pieces, provides an excellent way to encounter this entrancing songwriter, whose pieces reflect and then transcend tradition.

How hip was Barrios? Check out "Cueca for Guitar" (audio), a Brazilian fantasia in waltz meter. It starts out simply enough, with the guitar playing blocky chords. Pretty soon, though, come tone variations — first featherweight harmonics, then sweeping glissandos, and finally a passage in which the guitarist softly taps the instrument to produce a percussive sound.

Born in a large family in Southern Paraguay, Barrios learned folk songs from his mother before studying the classical repertoire. Convinced that Barrios was a special talent, a local teacher prevailed upon his parents to let him move to a larger city to further his studies; by the time he was 20, he was composing mature pieces. These fall into several categories: Some are folkloric, some are religious, and some, like the moody "Preludio for Guitar" (audio), borrow chord progressions and structure from established classical forms.

Even in his most scholarly moments, however, Barrios is an individual: His long, rhapsodic melodies move in graceful strides, while his chord sequences are active enough to provide rock guitarists with plenty to puzzle out. Williams renders these pieces reverently, with no extra fanfare. He makes sure that even in the most technically dazzling moments, the spotlight remains on the tender and intricate music of an unjustly overlooked composer.