Accessibility links
Judging A Book (Bag) By Its Cover Worn-out books often just get tossed in the trash. But artist Caitlin Phillips recycles some unwanted books by cutting out the pages and using the covers to make unusual purses. Turning classic books into fashion items, however, poses challenges that are both aesthetic and ethical. 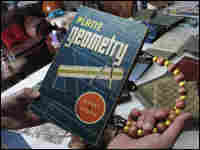 Obsolete textbooks often get thrown out, but their retro cover art is still in fashion. Nell Greenfieldboyce/NPR hide caption 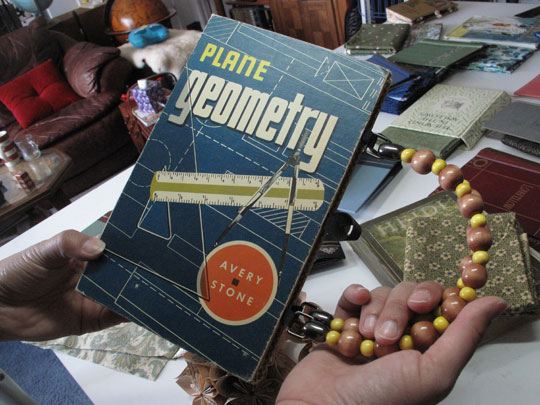 Obsolete textbooks often get thrown out, but their retro cover art is still in fashion. 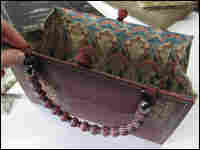 The fabric should look like it "grew" out of the book, matching the hardcover's colors and mood. Nell Greenfieldboyce/NPR hide caption 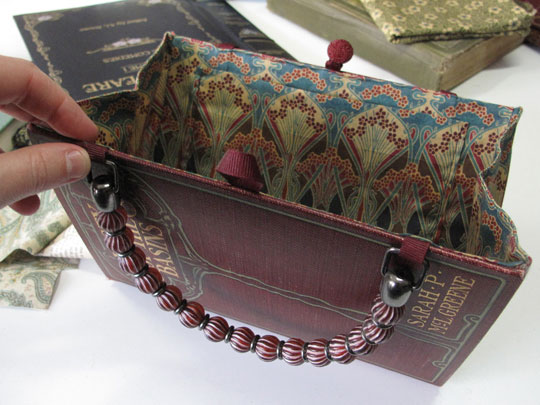 The fabric should look like it "grew" out of the book, matching the hardcover's colors and mood.

Caitlin Phillips goes through 500 to 750 books every year. But not because she's a speed reader. Instead, she cuts out all the pages and replaces them with beautiful fabric, to transform old books into stylish purses.

"Sometimes people are like, 'I can't believe you did that to a book!' " says Phillips, who admits that it was a little weird at first to take a utility knife to novels, encyclopedias and textbooks. "It's very subversive."

Growing up, Phillips read constantly and was taught to treat books as almost sacred. She would never write in the margins or dog-ear the pages.

But then a job at a used bookstore taught her that every year, huge numbers of out-of-date or damaged books are just tossed in dumpsters.

"It kills me to throw anything away," Phillips says, "and throwing a book away just seems like the worst thing ever."

Especially when many of these obsolete books had beautiful covers that looked like art.

One day, about five years ago, Phillips was daydreaming while working a dull job as a salesperson for a cutlery company. She had always liked sewing clothes and recycling old materials into handmade crafts, and she had heard about purses made from cigar boxes or old license plates. So she began to sketch a design for a book purse.

"The book kind of pretty much decided what form it was going to be," she says. "The spine becomes the bottom of the purse, because I keep the cover completely intact." She adds handles and a vintage button to match.

She started experimenting using Reader's Digest Condensed Books, which she describes as "book-shaped objects." She sold them quickly, and her business took off. Now she has a company, Rebound Designs, and sells her creations at craft shows.

The most requested book is Pride and Prejudice — overwhelmingly so, Phillips says. "It's a great book, but I did not realize truly just how popular it was."

Turning books into accessories presents challenges that are both artistic and ethical.

The artistic judgment comes when choosing the fabric. "My goal is to find a fabric that looks like it grew out of the book," Phillips says. The colors have to complement the book cover, and the pattern has to be appropriate. When turning Gone with the Wind into a purse, for example, Phillips might use reproductions of patterns popular during the Civil War.

But not every book is a potential purse. Phillips reaches into one of her many bookshelves and pulls out a leather-bound tome entitled Science of Eugenics. She says this is a beautiful, valuable book, so she wouldn't cut it up. But also, the idea of this as a purse "would be a little creepy; it's disturbing." Similarly, you won't see a Mein Kampf purse being sold on her company's Web site.

And Phillips won't cut up the Quran, although she will sometimes cut up a Bible, especially if it's a custom order from someone who wants to commemorate a well-loved copy that has fallen apart after years of use.

For a long time, she wouldn't cut up Fahrenheit 451, "because the irony was just overwhelming, to cut up a book about destroying books." But she recently got a whole stack of used paperbacks that, she says, make great wallets.

Turning books into fashion accessories does force people to think about what really matters when it comes to books, Phillips says. Is it the information inside that's important, or the actual physical thing? How will new technologies, like Amazon's Kindle, affect the way people look at books?

Phillips says her own library of books is carefully guarded; she doesn't even like to lend some books to friends.

And she saves all the pages that she cuts out of books. "I don't just toss them," she says. "I have stacks and stacks of books with no covers." She often gives them to artist friends who use them for collages or other projects.

Sometimes, she says, while cutting up books, she has to turn them upside down so that she can't understand the printed text. Otherwise, she wouldn't make any purses — she would be too busy reading.

Caitlin Phillips talks about which books she will turn into bags -- and which she won't.