Accessibility links
National Service Act Continues U.S. Tradition President Obama signed a massive $5.7 billion national service bill into law Tuesday. The measure, which triples the size of the Clinton-era AmeriCorps program, harkens back not only to the days of FDR's New Deal but also to an idea imbued in the American psyche since the country's earliest days. 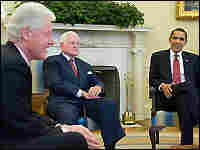 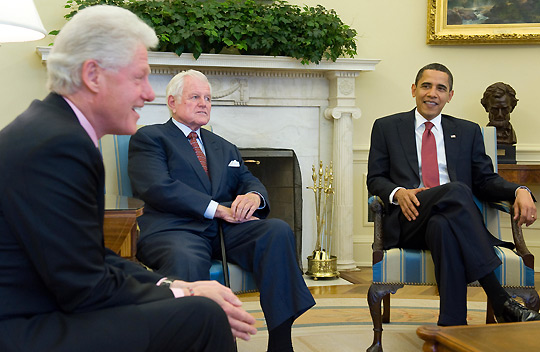 President Obama's signature on a massive $5.7 billion national service bill, which triples the size of the Clinton-era AmeriCorps program, harkens back not only to the days of FDR's New Deal but to an idea imbued in the American psyche since the country's earliest days.

AmeriCorps has grown to some 75,000 members since the program, envisioned by President Clinton as a "domestic Peace Corps," was enacted in 1993. The new legislation provides funding to boost the number of volunteers to 250,000 over the next eight years and defines five categories of service: aiding the poor, improving education, encouraging energy efficiency, strengthening access to health care and assisting veterans.

'The Moral Equivalent Of War'

Pushing voluntary public service programs has been a priority for Obama, who credits his experience as a community organizer in his 20s with providing him much-needed focus.

Today's act continues a tradition of advocating national service as a way to help the country, provide new skills and instill a sense of civic duty among Americans. U.S. philosopher William James provided the inspiration for a national service program in a 1906 essay in which he called for universal national service to form "the moral equivalent of war" to inspire patriotism and "redeem the society from a dull existence built upon a 'pleasure economy' of insipid consumerism."

But the idea, or at least the ideal, of national service dates back much further, says John Bridgeland, who headed the USA Freedom Corps, a Bush administration initiative to promote individual volunteer efforts, including those of faith-based organizations.

"Almost every president, dating back to George Washington, has talked about the need for citizens to volunteer their efforts and expertise to the nation," Bridgeland said. But he noted that "it was Franklin Roosevelt who really put that into practice."

National service has long been a part of the social fabric in much of Europe and in countries such as Israel, where it is often a compulsory alternative to military service. In the U.S., initiatives have come in fits and starts and with varying degrees of success, beginning with the New Deal-era Civilian Conservation Corps.

"The CCC was really the birth of the modern national service movement," Bridgeland says.

The quasi-military CCC — complete with Army-like tent encampments and the threat that malingerers would be "dishonorably discharged" — put some 3 million Americans to work between 1933 and '42. They performed such tasks as planting trees and teaching soil conservation long before anyone referred to them as "green jobs." One of the CCC's lasting legacies is the creation of scores of state parks that are still in use today.

But the program's real purpose was more pragmatic.

"FDR's main goal was to keep unemployed, low-income men off the streets so they wouldn't cause trouble," says E.J. Dionne Jr., a senior fellow at the Brookings Institution and columnist for The Washington Post.

"But [the CCC] was the first real effort to engage masses of young people, and there are a lot of AmeriCorps people who look to the program as part of their inspiration," says Dionne, who also edited the book United We Serve: National Service and the Future of Citizenship.

The Peace Corps And The Great Society

Picking up the embers of the CCC, President Kennedy formed the Peace Corps in 1961 amid the Cold War need to spread a positive image of America to the developing world.

Kennedy also saw the Peace Corps, which sent armies of mostly college-aged Americans to work in places such as Africa and Asia, as having long-term benefits back home by combating the country's isolationist tendencies.

"A significant number of Americans were going out and getting their first exposure to a foreign culture and a different way of living," Bridgeland says.

"The hope was it would lead to more informed foreign policy because these people would come back and end up in schools, in boardrooms and in government and actually know something about the outside world," he says.

The second big wave of national service initiatives came by way of President Lyndon Johnson's Great Society. It included a domestic equivalent of the Peace Corps called Volunteers in Service to America, or VISTA.

VISTA targeted college students from low-income families, offering them loans in return for community service, much of which came in the form of community activism, Dionne says.

"A lot of conservatives had problems with that," he notes.

"Many conservatives, people like [former House Majority Leader Dick] Armey, were honest enough to say they thought this would train a new generation of left-wing activism," Dionne says, adding that in the intervening years, such objection has largely fallen away.

Bridgeland says that philosophically, Clinton had tapped into the much-ridiculed "thousand points of light" ethos espoused by his White House predecessor, President George H.W. Bush. It was an idea that would be expanded by George W. Bush, whose USA Freedom Corps sought to bring together the government and private nonprofit "faith based" organizations.

Although USA Freedom Corps is being discontinued in name, the Obama administration is picking up several key components and incorporating them into a broader plan.

The legislation Obama signed Tuesday, called the Edward M. Kennedy Serve America Act in honor of the Massachusetts senator who shepherded it, is the "quantum leap in community service that we've all been looking for," Bridgeland says.

"Left, right, center — the idea has broad appeal," he says.

Past Failures And Potential Problems

But there also are plenty of issues that critics can zero in on, says James Perry, an Indiana University professor of public and environmental affairs and co-author of the book Civic Service: What Difference Does It Make?

For example, he says, "if you look back at the history of national service, you see lots of failed attempts to create a teachers' corps."

Perry also says that getting the right kind of highly skilled recruits, who typically receive only a small stipend for their services, is a key problem — one that will become even harder as the economy improves. And economic stimulus is, after all, one of the key aims of the national service measure.

"That's why the CCC went out of business," Perry says. "We needed soldiers more than we needed trees planted."

Nonetheless, Perry says the programs can work if Americans insist on getting tangible results for the public investment, something he says the Serve America Act does address.

"We have a great opportunity now. We need to spend lots of public funds, and we need to put people to work," he says. "In short, the stars are aligned for national service."