Accessibility links
Brahms' French Horn Of Plenty, In Concert The mystery of which type of French horn Brahms intended for his lyrical Horn Trio may never be solved. But there's no denying that Brahms came up with some of the very best music for the horn, with or without valves, in the history of the instrument.

Compare for yourself. Here's what the finale of Brahms' Horn Trio sounds like on the natural (valveless) horn. 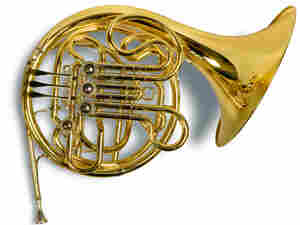 Brahms was biased against the newfangled French horn with valves. As a child, he played the old-fashioned valveless horn, called the "Waldhorn." iStock hide caption

When Brahms composed his Horn Trio in 1865, he was working with a revolutionary instrument. The earliest horns used by hunters and by military bands were capable of making a lot of noise, but they weren't very expressive instruments, and by the middle of the 19th century, that had changed. Newer, easier-to-play horns with valves could blend nicely into the background of an ensemble piece and also carry a beautiful solo melody much easier.

But Brahms didn't appreciate the newfangled French horn. He once mocked the instrument, calling it the "brass viola." And he was uneasy about imagining his Trio played with such a thing.

"But I would be apprehensive about hearing it with the valve horn," Brahms wrote to a friend. "All poetry is lost, and the timbre is crude and dreadful right from the start."

Oddly, his description of the new horn is precisely how many people would describe the sound of the older horn today. Perhaps Brahms loved the old, romantic sound of what he called the "Waldhorn" (or "hunting horn") because he played one as a kid. So when he set out to write his Trio, he knew it would be written for what is today referred to as the "natural horn." In fact, the title on the manuscript reads, "Trio fur Pianoforte, Violine & Waldhorn."

How Do You Take Your Horn, French or Natural?

Actually, the jury is still out on which type of horn Brahms preferred for his beautiful trio, which was premiered in Zurich on Nov. 28, 1865. This is the territory of sleuthing musicologists.

George Bozarth, professor of historical musicology at the University of Washington, points out evidence to support both sides of the story. For one thing, Bozarth says, we know the name of the horn player who performed in the premiere, but we do not know which type of horn he played.

Bozarth says that some scholars feel Brahms intended the valve horn right from the start because one can see that "he wrote a number of passages in the autograph score that were not idiomatic for the natural horn." Then, at some point later, Brahms revised them to be playable on the instrument.

Another camp, Bozarth says, proposes that in the beginning Brahms wrote for the natural horn, "but did not fully appreciate what would and would not work on it until he heard a trial performance. Then he made the necessary changes."

These days, the Trio is played both ways. In this concert performance (at the top of this page), John Zirbel plays the modern valve horn. At the side of this page, compare the sound by listening to a new recording performed by Teunis van der Zwart on a natural horn built in 1845.

Anyway you hear it, there's no denying that Brahms was inspired, and came up with some of the very best music for the horn — valves or natural — in the history of the instrument.