Accessibility links
Smaller Firms May Come To Michigan's Rescue With the demand for fresh water on the rise, former autoworkers are now finding jobs in a new industry: pump engineering. The high-efficiency pumps are used in water desalination plants. 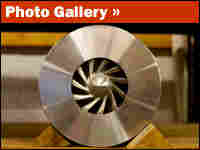 Resisting The Recession In Detroit
Brian Widdis for NPR

Michigan faces pressure to find another line of work.

Detroit's downsizing auto industry is a long way from the heroic role it plays in Detroit's past. Visitors to the city can still see a Depression-era mural that covers all four walls of a room in a Detroit Museum. Diego Rivera portrayed workers slamming together automobiles as they wrestled with the machinery of a Ford Motor Company plant.

Today, the auto industry's trouble is one big reason behind the nation's highest unemployment rate: 12.6 percent across Michigan, and much higher in Detroit. Hope for creating jobs may lie instead with a host of much smaller firms, like a manufacturer that is hiring in a small city outside Detroit.

Instead of cars that run on oil, workers at this plant in Monroe, Mich., make a product that moves water.

"Most of what you see here is exported. That one is going to Saudi Arabia," says Robert Oklejas of Pump Engineering as he watches some employees spin stainless steel cylinders, shaving them to size for a custom-made water pump.

Desalination plants, as they're called, push ocean water through filters so it can grow the crops, or fill the glasses, of increasingly thirsty nations. Oklejas rattles a few of them off: "Pakistan, India, and North Africa, Algeria's going to be a big customer, Spain."

Pump Engineering's competitors include another firm in Monroe, Mich., that happens to be run by Robert Oklejas' own brother, Eli.

If it sounds like Eli Oklejas serves the same markets, that's true.

The brothers both decorated their conference rooms with nearly identical floor-to-ceiling wall maps of the world.

Their competition leads to one big question: "Is Thanksgiving awkward?"

He says they don't see much of each other. This wasn't always the case. The brothers grew up together. They went into business together. They were both inspired by an inventor named Nikola Tesla, who, like their family came from Serbia. But after a business disagreement, they split into rival firms.

And both companies are still growing in a recession.

People can put off buying a car, but they still need water.

"At one time we lost employees to the automobile industry. They're coming back to us," says Robert Oklejas, "I think they're appreciative of having a job."

Robert Oklejas' company has a bell which used to ring after every sale. Now sales are so common they've stopped the practice.

Pump Engineering may be succeeding, but it employs only 38 people.

A Growth Area For Michigan

Jim Epolito just finished three and a half years as the head of economic development for Michigan.

And GM is making even more layoffs this week.

The state will keep losing that race until it finds even more new employers. The Oklejas family trouble helped in a way, creating two firms instead of one. Eli Oklejas says that it's nice to be hiring when everybody else is cutting staff.

So nice that Eli is expanding his company's building. Which is one more thing about doing business in Michigan's recession: commercial real estate is really, really cheap.