Accessibility links
Carved Success: Sam Maloof's Handmade Life The legendary woodworker is known for his minimalist, handmade furniture. The son of immigrants from Lebanon, he has won a MacArthur "genius grant," and his work has been exhibited at the Smithsonian and the Metropolitan Museum of Art. 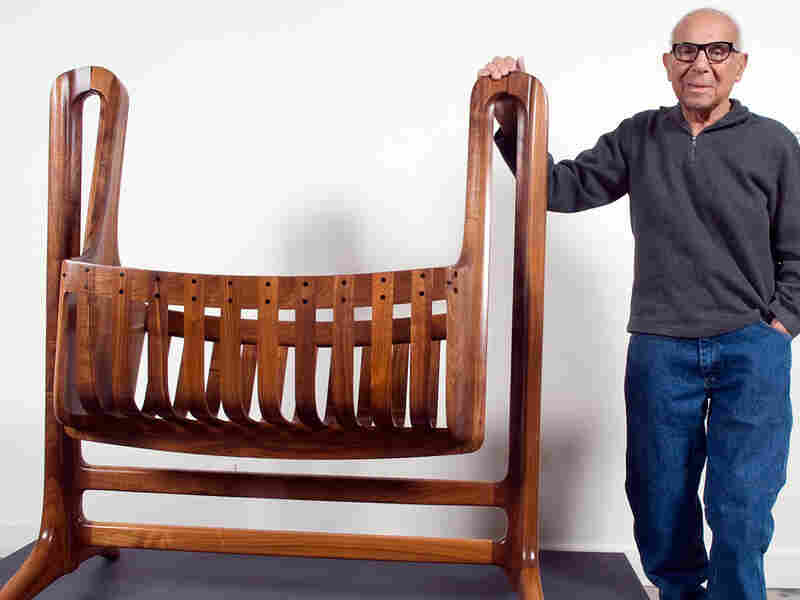 Sam Maloof was born in Chino, Calif., to immigrants from Douma, a lovely Mediterranean village in the mountains of what was then Syria and is now Lebanon.

To woodworkers, 93-year-old Maloof is an icon. He has won a MacArthur "genius grant," and he's credited with helping to launch the California modern arts movement. His elegantly minimalist furniture has been exhibited at the Smithsonian and in the Metropolitan Museum of Art. Right now, though, Maloof is shuffling around his shop, frustrated. Just released from the hospital, he's under strict doctors' orders to not pick up a tool.

Maloof taught himself how to woodwork after serving in World War II and marrying his wife, Alfreda.

"She bought a little tract house for $4,200, which now is probably worth about $400,000," Maloof chuckles. "It didn't have a lot of furniture in it. Plywood floors, no carpeting or anything. And so I put rugs down, and then I found a lot of scrap wood, and I made furniture out of it for the house."

Back then, no one designed furniture specifically for tract houses. Maloof was onto something new that fit California's evolving design aesthetic. At a moment when most Americans were enthralled with mass market, factory-manufactured goods, Maloof was turning away, toward the handmade. He became friends with potters and people who made stained glass. They were a community, then a movement. Maloof says making things by hand is part of his family legacy.

Eventually, Maloof's parents opened a department store in Chino. They were the town's only Arab family. He says their ethnicity was never a problem, partly because of his mother's warmth and charisma — he remembers her giving away vegetables from the family garden during the Depression — but also because no one knew how to class them racially or ethnically. As he remembers it, they got along with everyone.

Today, Maloof's home is a state-designated historic landmark, nestled in the green-gray foothills of the San Gabriel Mountains outside Los Angeles. The hand-built redwood building is open Thursdays and Saturdays for public tours. Maloof built his house room by room as he earned money for materials. It glows like an ember — its pink and orange walls lit through golden glass. And it's warm with wood, from the buttery swirl of bird's-eye maple to the dark chocolate of burnished walnut. The house boasts a world-class collection of Pueblo pottery, tribal masks, antique carousel horses, wood prints, oil paintings, kachina dolls — all jostling for space with Maloof's spare, sculptural furniture.

Maloof carved it, as he does all his furniture, freehand with a band saw. It can be terrifying to watch.

Jeremy Adamson curated a Maloof retrospective at the Smithsonian, and he's written a book about the artist. He says Maloof's instincts come from decades of experience, but also from a deep, almost spiritual connection between material and man.

"All the parts come together in a very rational way, but they meet each other in such joyful connection," he says. "There seems to be a pleasure that the leg fits the chair. They're happy to be together. It's as if they really have grown together."

When Maloof was still struggling to support his family, he turned down several lucrative offers to mass-produce his furniture — on principle. The black sheep of the family who never went to college now has three honorary degrees.

Maloof has said that when making furniture, start with the legs: They're like values, principles, beliefs. Choosing the arms is like choosing friends. And the seat keeps you upright, steady and looking ahead to your goals and your future. Those sound like ideas a woodworker could have learned from two young immigrants who came from Douma more than a hundred years ago.