Accessibility links
Amadou And Mariam: Afro-Pop Goes Global : World Cafe Malian husband-and-wife duo Amadou and Mariam began recording together in the 1980s, and soon flourished by adding Syrian violins, Cuban trumpets and Indian tablas to their infectious African blues-rock, Western pop and funk. On their new album, Welcome to Mali, the pair sings in English and French instead of their native Bambara. 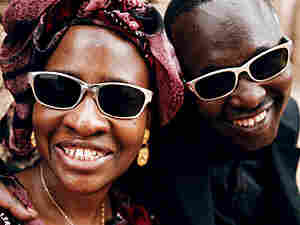 Malian husband-and-wife duo Amadou and Mariam began recording in the 1980s after meeting at Mali's Institute for the Young Blind. Their songs began with sparse arrangements, with Amadou on guitar as support for Mariam's singing. By the 1990s, their Afro-blues was fleshed out with Syrian violins, Cuban trumpets and Indian tablas, to create a sound that encompasses African blues-rock, Western pop and funk.

After teaming up with Manu Chao to record Dimanche a Bamako, Amadou and Mariam successfully broke into the commercial realm by penning the theme for the World Cup in Germany. Their fifth and latest studio release, Welcome to Mali, recalls influences such as reggae, blues, R&B and rock. They impressively master the subtleties of seemingly simple rhythms and infectious melodies, establishing their single "Sabali" (produced by Gorillaz's Damon Albarn) as a critical darling. In a session with host David Dye, the couple talks about the adjustment to singing in English and French instead of their native Bambara.