Accessibility links
Ran Blake: Ghosts In The Piano The grainy, blurry portrait of Ran Blake on the cover of his album, Driftwoods, looks like spirit photography: the pianist as ghostly presence. His playing can be spooky, too. The CD radically transforms popular vocal standards from Billie Holiday, Hank Williams, Quincy Jones and more. 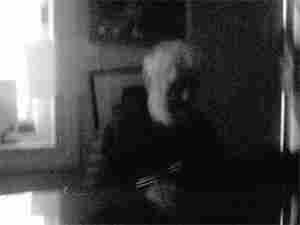 Ran Blake makes even "You Are My Sunshine" sound fraught with anxiety: How will he cope if they do take his sunshine away? The grainy, blurry portrait of Blake on the cover of his album, Driftwoods, looks like spirit photography: the pianist as ghostly presence. His playing can be spooky, too. With his precise touch and subtle use of foot pedals, he'll foreground some notes and place others in a murky background, like a menacing cloud on the horizon.

Blake loves Hollywood film noir, with its exaggerated shadows and air of doom — that feeling of being trapped underwater. On his new album, even a tune associated with Fred Astaire sounds sinister. Blake's two versions of "Dancing in the Dark" suggest not gliding across a soundstage with Cyd Charisse, but finding out that those threatening calls are coming from inside the house.

No pianist sets a mood better than Blake, and he loves tunes that carry their own baggage. On Driftwoods, he plays Quincy Jones' theme from "The Pawnbroker," Billie Holiday's downer ballad "No More" and her dirge about lynching, "Strange Fruit," all radically transformed. Hank Williams himself might not have recognized his song "Lost Highway."

You'd want to look elsewhere for bouncy tempos and a happy vibe, but lots of pianists give you those. Blake is special, combining influences that don't quite fit: Bill Evans' gauzy harmonies meet Thelonious Monk's stubborn pace and percussive hammering. Blake peppers his surreal improvisations with blues and gospel licks; he loves those African-American musics for the deep feeling interpreters bring to them, like on "There's Been a Change."

Blake's music is about more than just the notes — it always has some deeper resonance. And yet he makes you acutely aware of the piano itself, all the shouts and whispers it's capable of. The paradox is that, if you want to play music that transcends the instrument that conveys it, it helps to know the mechanism inside out. On Driftwoods, Ran Blake finds his ghosts in the machine.