Accessibility links
Queen Rania: World Cannot Afford To Be Cynical Jordan's Queen Rania is in Washington, D.C., with her husband, King Abdullah, to reinforce the message that time is running out for a two-state solution to the Israeli-Palestinian conflict. She says the cynicism that plagues the peace process is one of its "greatest enemies." 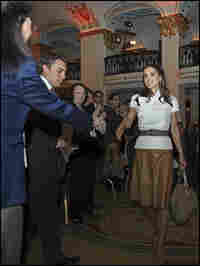 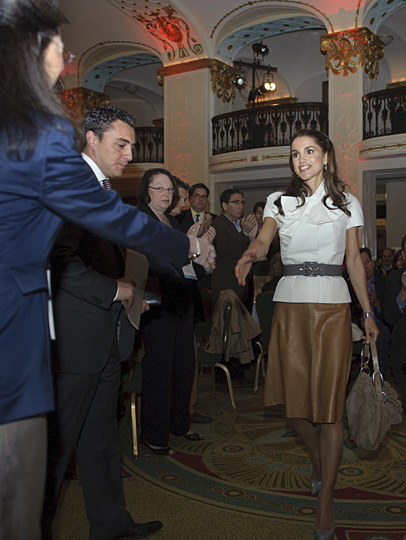 Queen Rania of Jordan heads to the stage to address the Global Philanthropy Forum in Washington, D.C., Wednesday.

Hear what Queen Rania listens to on her iPod on NPR's 'The Question' feature.

King Abdullah of Jordan had a warning for President Obama on Tuesday when the two met at the White House: Time is running out for a two-state solution for the Israeli-Palestinian conflict.

The king's wife, Queen Rania al-Abdullah, who is also in Washington, is reinforcing that message.

The queen, who is Palestinian, has used her position to talk about a range of issues, from finding peace in the Middle East to educating women and girls, and addressing stereotypes about Muslims.

Last year, she launched her own YouTube channel. She explained why in a send-up of David Letterman's "Top Ten." The No. 1 reason on her list is because "intolerance and mistrust are driving us apart."

Queen Rania tells NPR's Michele Norris that she knew she was exposing herself when she created the channel to help foster debate over the Middle East peace process. But she says that through the exercise, she was able to hear the "various points of view unedited, unfiltered."

"When you're a public personality, no matter how much you try to remain open, invariably there will be filters around you — and you may not hear it as it is," Queen Rania says. "It's not until you really interact with the other side, where you put yourself in their shoes and try to see things from their eyes, that you start to empathize. That's where you get more tolerance and acceptance among people of different cultures."

She says that the world cannot to afford to be cynical, because then it would be "writing off the futures of hundreds and thousands, if not millions of people, condemning their lives to hardship and really saying that there's no future for them."

"We know what the solution is to this problem," Queen Rania says. "What we need is the political will and the commitment from all parties to really take the steps that need to be taken on the ground. We mustn't let the extremists on both sides dictate the agenda and the path toward this process."

In an interview with NPR's Michele Kelemen, Queen Rania's husband, King Abdullah, said that Israel has to decide if it wants to be a part of the neighborhood or continue to be "fortress Israel."

Queen Rania says her husband was talking about the Arab Peace Initiative, which was endorsed by 22 Arab states and supports the two-state solution.

Queen Rania also says that she wants the Obama administration to hold both sides accountable.

"The new president enjoys an incredible amount of credibility all over the world, as you know, and particularly in our region," she says. "And we hope that his administration is able to articulate and map out a vision for our region — and to be able to expend his political capital in the right way, and to invest it in really trying to find a final solution to this long-standing issue."

She says she thinks the U.S. has "the opportunity to put its best face forward."

"I believe that, unfortunately, [for] many in our region, the only American face that they have been exposed to is that of a military personnel," she says. "With all due respect to the military, I think what Americans really excel at is innovation, is their humanity, their philanthropy, the way they like to help people. We need to see more of that face in the Arab world."