Accessibility links
Why Can't Detroit Cash In On Its Music Scene? Even with a music scene that's been churning out stars for decades, Detroit has yet to find a way to make "Motor City" a music city. 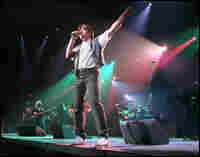 We haven't cultivated our music culture or our talent to create the industry around it except through Motown. We haven't harvested, we haven't nurtured it, and we have literally neglected it. 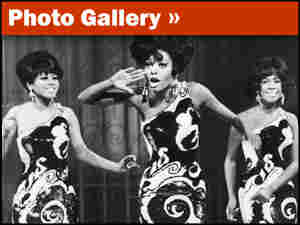 For many, the Detroit music scene can be summed up in a single word. But while Motown, the legendary label founded by Berry Gordy, did bring the world The Supremes, Stevie Wonder, Marvin Gaye, Diana Ross, The Four Tops and The Jackson 5, it is only part of the Detroit story. Popular music made by people with Detroit connections includes something for just about any taste.

Take the sound of John Lee Hooker, who worked at a Ford plant well before the Motown sound came around. Detroit has also been home to great jazz, folk, country, hip-hop and rap artists.

And don't forget the non-Motown soul singers. First and foremost, a woman named Aretha, who started out singing in her father's Detroit church.

Mitch Ryder fronting a band called the Detroit Wheels; big arena rock icons like Bob Seger; a performer whose stage name is Alice Cooper — Detroit's music scene has always been as much about breaking ground as making hits.

The city was a breeding ground for some of the icons of hard rock and punk. There was the MC5. And a guy named James Osterberg — you may know him better as Iggy Pop.

As each decade has passed, another crop of artists with Detroit ties has risen to the top of the charts. Madonna grew up in the Detroit suburbs. Then there's that white rapper from just north of 8 Mile Road.

These days, one of the most highly regarded bands in rock is another product from Detroit, The White Stripes. And there's an entire genre of music sprung from Detroit clubs in the late '80s that still has a global following — techno.

So you might assume the music business is a big element in Detroit's economy, just as it is in other cities that have made an industry out of their local music scene. Memphis has Beale Street. In Austin, it's Sixth Street. In New Orleans and Nashville, it's just about everywhere.

All of these cities have made their music scene a major tourist draw. And not just for the big festivals, but week in and week out at clubs and small theaters. People gravitate to these places as destinations to hear great live music.

But that hasn't happened for Detroit, despite the decades of immensely popular music associated with the city.

W. Kim Heron is the editor of the alternative weekly newspaper The Metro Times. A veteran Detroit journalist and music writer, Heron says Detroit did once have such a district. But it got buried, literally, a half-century ago when they built the freeways that intersect this automobile capitol. "Our Beale Street is somewhere under I-75," Heron says.

One member of the Detroit City Council says Detroit needs to do more to promote its musical legacy. Her name is Martha Reeves. And yes, she is that Martha Reeves from Martha and the Vandellas.

"I've gone to other cities and seen statues and plaques depicting the wonderful, great artists that were created and discovered in the different hometowns," Reeves says. "And since Motown left Detroit in the '70s, there has been very little memorabilia."

There is a Motown Museum in Detroit. It's the original Hitsville USA studio in the little house on West Grand Boulevard. But Motown Records has been gone now for decades, ever since Gordy moved to Los Angeles and expanded into the movie business.

Detroit lawyer Gregory Reed is convinced that Detroit can still turn its music scene into a tourist destination. "We haven't cultivated our music culture or our talent to create the industry around it except through Motown," he says. "We haven't harvested, we haven't nurtured it, and we have literally neglected it."

Reed has been named head of a newly created Detroit Entertainment Commission. He says businesses need to see that there is money to be made. "You've got to plug in the business side," he says. "Because other than that, the talent will leave the city, and it's just a cycle."

Reed says the commission's goal is to focus on entrepreneurs with private funds who realize music is a valuable resource that the city hasn't fully tapped.

But even without a physical place to point to as the home to Detroit's music scene, the city continues to cultivate talent that it exports to the country and the world.

Mary Ramirez, who plays guitar for the Detroit Cobras, says Detroit offers a lot of inspiration to its musicians and something else even more basic. "Since the rent is cheaper and you can get like five people in a big house, people don't spend a lot of time working," Ramirez says. "There's a lot of people available to play with you."

Rachel Nagy, the band's lead singer, agrees. "It's not like New York, [where] you have to have three jobs just to pay your damn rent," she says.

But can Detroit regain its mystique and become a music Mecca again? Nagy has her doubts.

"They've been promising, oh, the rebirth of Detroit since I was a kid," she says. "And it's never happened, and I am sorry, I don't really have faith. Especially now with the economy. Now's not the time for that to happen, either, because people are really hedging their bets."

But that's not all bad, Nagy says. "That environment is also a reason why this kind of music thrives — because we can do whatever we want; we can play as loud as we want."

Nagy, Ramirez and the rest of the Detroit Cobras tour regularly. But Detroit is always the place they come to regroup and recharge. The city still offers a connection to their roots and a sense of community.

What Detroit still lacks is the business model that would allow Motor City musicians to thrive and contribute to the city's economic survival as well.